Historic baptismal font back in Newcastle West after 60 years 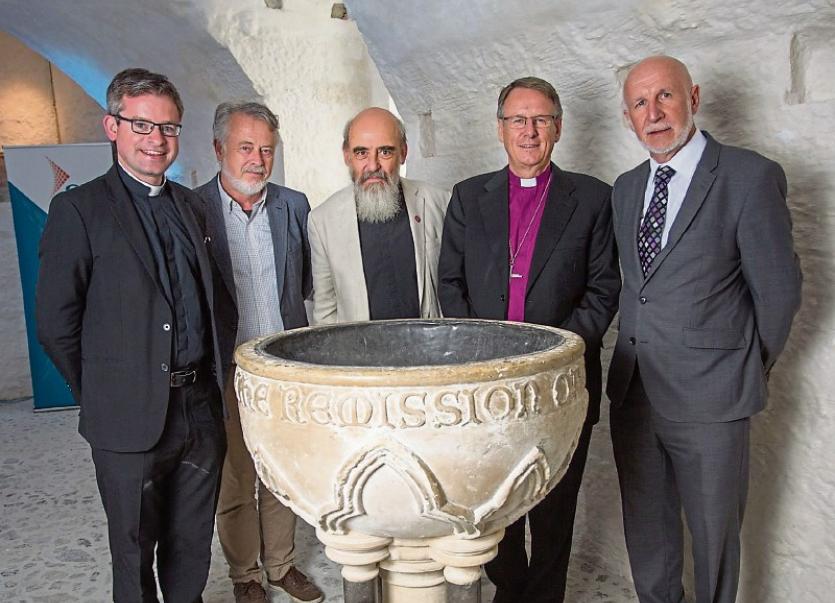 A ‘PRECIOUS’ baptismal font which was used for baptisms in Newcastle West over nearly 200 years has been returned to its home town.

St Thomas’ stone baptismal font was absent from the town for nearly 60 years, having outlived the church in which it was originally housed.

In recent years, the Office of Public Works was carrying out restoration works on the font.

But last week, St Thomas’ baptismal font was returned to the town – where it was once used for its intended purpose, in a church that has now been demolished.

The baptismal font has been installed in Desmond Castle, where it is open to the public to view. The castle is close to the original site of the church.

St Thomas’ Church was built in 1777, but it closed in 1958 and was demolished in 1962. The font had been moved to St Mary’s cathedral in Limerick city.

The only remainder of St Thomas’ church is the building’s footprint inside the gate, so the OPW considers the font “a precious monument” of both national and local significance.

The restoration of the font was carried out by OPW craftspeople.

St Thomas’ font was used for the baptism of hundreds of Newcastle West children of the Church of Ireland faith.

One of the most famous people to be baptised within the stone bowl was Sophie Peirce (1896-1939), an early Irish aviation pioneer and native of Newcastle West.

Sophie, who later became Lady Heath, was one of the best known women in the world for a five-year period from the mid-1920s, having become the first woman to hold a commercial flying licence in Britain.

She broke the world altitude record for British light aircrafts in 1927, and also lectured on aviation. In 1928 she became the first pilot to fly solo from Cape Town to London, and she was also the first woman to parachute from a plane, when she landed in the middle of a football match.