‘She feels like she is dying’: Mum infected twice at University Hospital Limerick 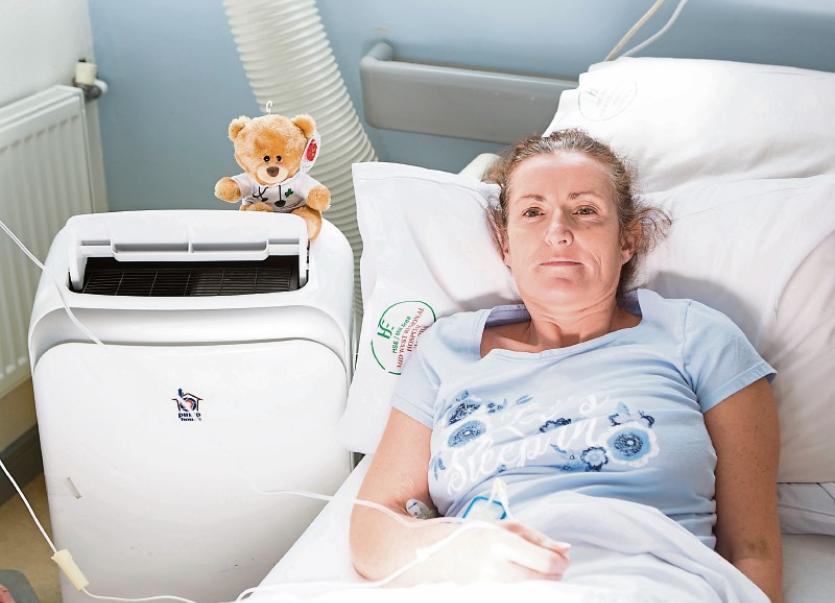 Sinead Johnson made national airwaves when she hit out at UHL on RTE’s Liveline with Joe Duffy last week Picture: Liam Burke/Press 22

A picc line is a small invasive tube or catheter that is inserted into the heart via the arm in order to pump nutrients into the body in the event the patient is unable to eat.

He claimed that two weeks after a stoma operation, she contracted the infection after a picc line was insert into her heart. The tube was removed and the infection was eventually cleared, he said.

However, after a second picc line was inserted, Ms Johnson developed the infection again on Friday evening and the tube had to be removed a second time.

Ms Johnson had contacted RTE Liveline on Friday afternoon, critical of the intense heat in the old wards at UHL due to the hottest heatwave in Ireland in 42 years and in the absence of an air conditioner.

A spokesperson for the UL Hospitals Group said that it is unable to comment on individual cases but is aware of the issues raised by the Johnson family and is making contact with them.

After developing sepsis a second time, she suffered “crazy low” blood pressure, her body temperature rose to 39.7 degrees Celsius, and suffered from pains in her head and chest, her son told this newspaper.

Mr Johnson said that his mother was transferred to a high dependency ward the following morning.

She had to receive two blood transfusions on Sunday following the detection of sepsis, after her haemoglobin levels almost halved overnight. He said that her bloods were clear before picc lines were inserted on the two occasions.

“She was speaking to me yesterday and she was telling me that she feels like she is dying. To look at my own mother, she doesn’t look like the woman I know. She has lost such an amount of weight, so pale, so ill, she looks like she is dying to be quite honest. It is worrying, in a centre of excellence, to see someone in such a state,” he said.

The student nurse said he is highly trained in cleaning precautions with picc lines.

“Because it’s a very invasive piece of equipment going into your heart, you need to take special precautions to make sure that infections don’t gain access because it is going straight into the blood system.” He added: “I have seen it done and I have seen it not done the right way also, which I am not blaming the nurses in the hospital, but I am blaming the fact that they are under so much pressure they’re cutting corners. Which shouldn’t happen, but it is happening and I have witnessed it myself.

“They are working in 42-degree heat. They are under severe pressure from being understaffed and have no resources available to them and it’s just disgraceful,” the Ballybunion man explained to the Leader this Tuesday.

The UL Hospitals Group said that early recognition and appropriate escalation of sepsis is key in its management in line with key factors, such as receiving correct antibiotic, having vital signs monitored and timely testing of bloods.

“Infection prevention and control methods such as hand hygiene is one element in preventing sepsis, the hospital group achieved a compliant result of greater than 90% recently in the national hand hygiene audits.

“The management of intravascular lines (picc) also play an important role; as such the hospital group has introduced sterile intravenous insertion packs. The hospital has also introduced the Aseptic Non Touch Technique which ensures that each line insertion adheres to international best practice to avoid sepsis.  Since their introduction, the hospital surveillance programme has identified there was no intravenous line related infection reported in Q1 2018, which is the most up to date information available.”

Limerick woman Mary Coll hit out at management also, after her aunt was forced to endure extremely hot conditions while fasting for an operation that was being postponed for days.

She said that other patients are “fasting from midnight in anticipation of an operation and by 4pm when that operation hasn’t taken place, that is the first time they get food or water until midnight again”.

The spokesperson said that it “endeavours to limit unnecessary fasting. Where patients are requested to fast and the procedure cannot take place, we would always seek to ensure the patient is advised at the earliest possible opportunity”.