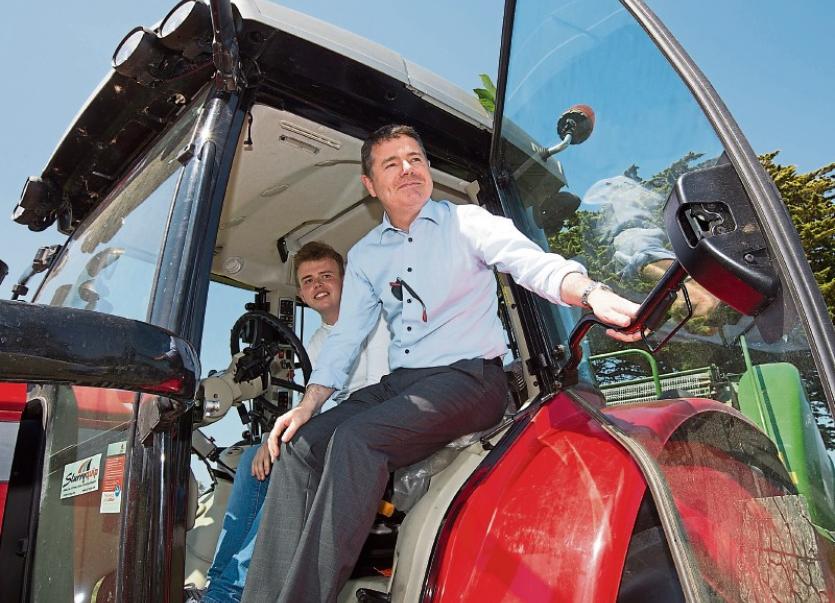 Minister for Finance Paschal Donohoe with Daniel McSweeney during a visit to the farm Picture: Press 22

“VERY smooth” said Minister for Finance, Paschal Donohoe after a spin on a Massey Ferguson in Patrickswell on Monday.

However, it is a rocky road for Limerick farmers at the moment. The vast majority are feeding silage they made only a few weeks ago as grass is burnt to a crisp. Fodder stocks are already at an all time low after the eight month winter. Ensuring wells don’t dry and animals get requisite water is their primary concern. Dark clouds are circling as the weather forecast says there are no clouds coming until next week.

Minister Donohoe was on a visit to the county on Monday and called into Michael and Deirdre McSweeney’s farm in Patrickswell. The minister said the government is aware of the anxiety and worry farmers are facing at the moment.

“The government have already convened a fodder group who have been meeting to deal with this issue, to consider what kind of advice can be made available and what can we do. We’re encouraging them to use feed supplements where they can to take the place of precious grass that is rapidly depleting in front of us. I want to listen to the farmers and see if there are any ideas we can bring to government,” said Minister Donohe,

Host farmer, Mr McSweeney told him meal vouchers were a simple and effective way to support farmers due to the huge cost of feeding nuts.

“Every area has to be judged on its own merits. Around here if it continues for another week we will need it. There are areas that are in dire straits,” said Mr McSweeney, a dairy and beef farmer.

He says winter came, winter went and then summer came.

“There was no spring! It’s unnatural weather. It went from one extreme to another extreme. There is no balance,” said Mr McSweeney, who milks 100 cows.

He has already been feeding bales of silage and cows are eating into grass that he had planned to set-a-side for second cut silage.

“Things are going to get bad. Farmers are feeding what they made six weeks ago and no winter yet. I had only 34 bales left at the end. Next winter is going to be the biggest problem and there won’t be enough fodder made. They say that after this heat spell we will get a burst of grass growth. Will it be big enough or will it be good enough? We don’t know - we will have to wait and see,” said Mr McSweeney.

His son, Daniel, who is heavily involved in Fine Gael, showed Minister Donohoe how to make bales.

“Paschal has never been on a farm before from what we know. We said it would be a good idea to get him up on the tractor to do a bit of baling, and connect with local farmers,” said Daniel.

“The minister for finance has difficult choices to make coming up to the Budget. I wanted to to bring him to meet farmers on the ground.

“It is important because it is about showing him first of all the difficulties that farmers are experiencing on a year to year basis. Secondly, this is a family enterprise that has a big community knock on.

“Some of my best friends are farmers, some of my strongest supporters are farmers, we are very heavily dependent on farming, I know the value of farming and that’s why I am constantly raising farming issues,” said Minister O’Donovan.