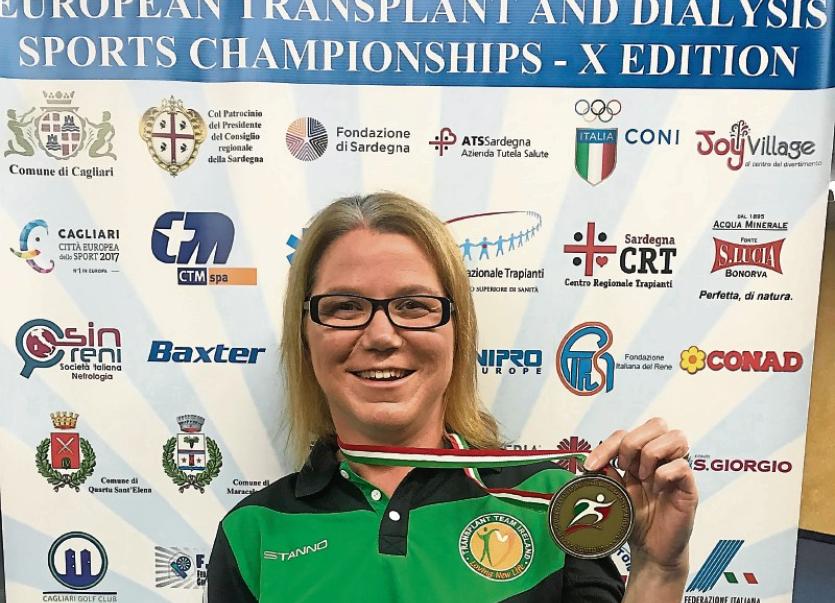 GLIN resident Emma O’Sullivan has played a starring role in the Irish team’s triumph at the 10th European Transplant and Dialysis Championships in Sardinia.

Emma, one of over 470 people taking part in the championships and one of 24 on Transplant Team Ireland, won two bronze medals, adding to the Irish total of 54 medals, including 11 gold, 20 silver and 23 bronze.

It marked a successful return to the games for Emma, who has undergone two kidney transplants and who last competed in 2010.

There was particular satisfaction  that one of her medals was in the 5k mini-marathon, a new event for her. Her second bronze was in the 200m, and she also competed in the 100m, the shot put and the ball-throw.

In Cagliari to witness her success were her husband John and son Ewan and her parents-in-law. Originally from Ballyraggett in Co Kilkenny, Emma  moved to Glin in 2015 and works in Listowel. She was always athletic and a keen camogie player and was inspired to enter competitive transplant sport after reading an article in an Irish Kidney Association newsletter. She is keen to encourage people who have had transplants, or people who are on dialysis,  to have a go.

“It’s great socially and is good for your health,” she said.

The games in Sardinia were her sixth time competing at international level. And the atmosphere at these events, she said, is tremendous. “It’s great. You meet people from all over the world, people who are in a similar situation as yourself. And there is great support.”

Happily, she added, both the European and World Transplant Games are growing and receiving more media attention. The next European Games will be hosted in Dublin in 2020.