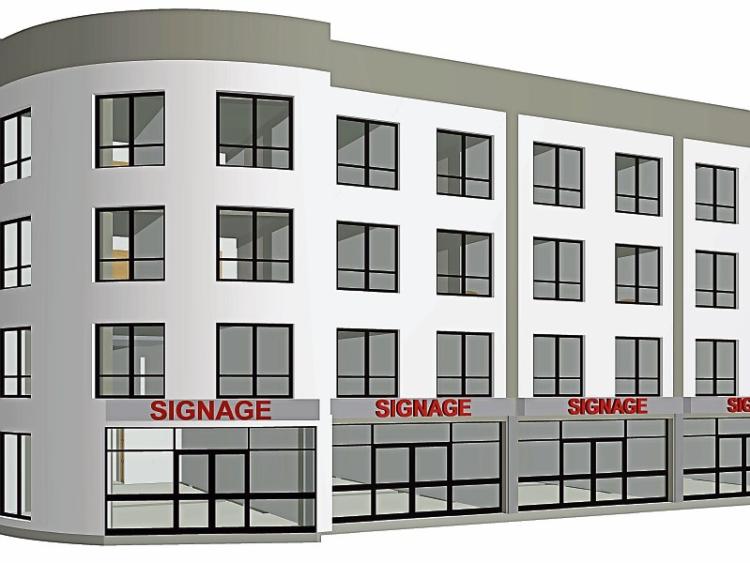 PLANNERS have given the green light for a massive €3m plan opposite the Milk Market which could bring 100 jobs to Limerick city.

Ellen Street developments has received conditional permission from Limerick City and County Council to construct a four-storey residential, retail and educational development at the junction of Ellen Street, Carr Street and Punch’s Row.

The proposal will see a building, which has been left unfinished since the crash, described by new mayor Daniel Butler as “unsightly and unsafe” completed.

A language school and seven retail outlets are planned for the ground floor, with five four-bedroom apartments on the first floor, and three duplex six-bedroom living spaces shared between this same floor and the top level of the complex.

Donal O’Byrne, engineer with Ellen Street developments, had previously said there would be 50 jobs once the project is completed, as well as the same number in the construction stage.

Newly-elected metropolitan mayor, Cllr Butler said: “It’s great to see they have planning approved. It paves the way for that eyesore to be completely redeveloped and brought back into use. Not only has it been an eye-sore, it’s been a source of anti-social behaviour and other activities. I hope it will support the activity and the goal to make the Milk Market a focal point for Limerick.”

But the Fine Gael man urged caution, because of the fact the site has seen previous proposals which have come to nothing.

One of these plans across the past decade was for the site to be rebuilt into a seven-storey apartment complex.

This is now down to four.

However, Cllr Butler pointed out Limerick City and County Council had engaged with the developer, and it has paved the way for this application, since the site was placed on the Vacant Sites register.

Limerick City and County Council gave the development the go-ahead subject to a number of conditions.

These include a stipulation the developer pays €100,460 to Limerick council for public infrastructure and facilities benefiting development in the area. On top of this, no building work will be allowed outside the hours of between 8am and 8pm Monday to Friday, and 8am to 4pm Saturday.

Noise stipulations are also in place.