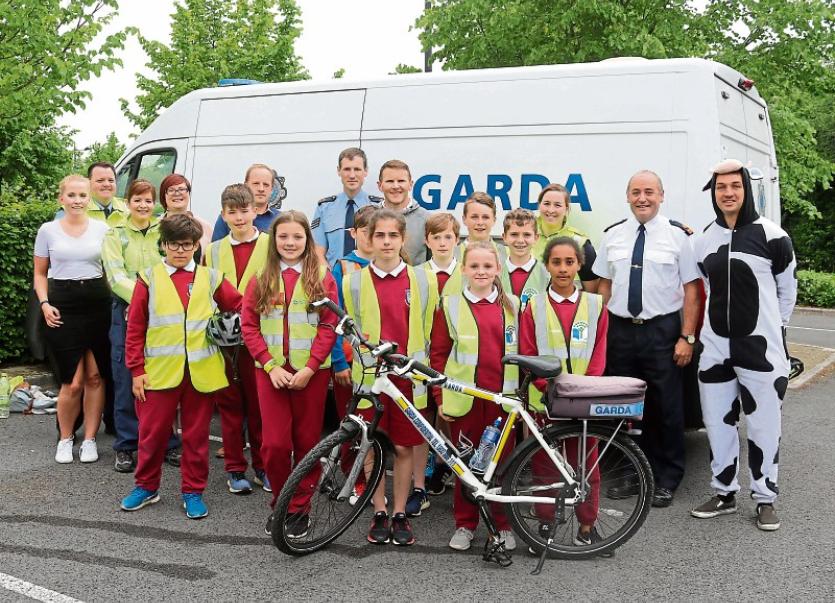 PUPILS from Monaleen National School came out on top in the final of this year’s Garda Safe Cycling Programme.

Supported by Limerick Smarter Travel and community gardai from Henry Street, the initiative was introduced a number of years ago to bring safe cycling to primary schools and promote road safety amongst young children.

The programme aims to promote knowledge and understanding of the principles of safe cycling; emphasise to cyclists to expect the unexpected and to be alert at all times; encourage children to maintain their bikes to a safe and high standard and to make them aware of the importance of all safety equipment.

“These challenges encourage the cyclists to be under control at all times while on their bicycle,” explained Garda Louise Jordan who is attached to Henry Street station.

Students were also given advice on how to check their bikes before going out on the road while they also received information regarding hazards which they may encounter while cycling.

“We spoke about the ten golden rules for safer cycling, the main causes of accidents, road signs and cycle lanes as well as the language of the road such as hand signals. We then returned to each school and gave them a small written test based on rules of the road and test them on their abilities to complete the four obstacle challenges,” added Garda Jordan.

Pupils from Monaleen NS, Gaelscoil Chaladh an Treoigh, and St Brigids NS school qualified for the final which took place at the University of Limerick recently.

Dara Dever, An Taisce’s green schools transportation officer gave a presentation on bike maintenance and puncture repair while Rachel Bourke from the Road Safety Authority gave a talk about road safety and the rules of the road.

The final was supported by a number of local businesses – Flying Tiger Copenhagen, Gleesons Spar, JJ Kenneally Jewellers, Halford and the Garda Sports and Social club.