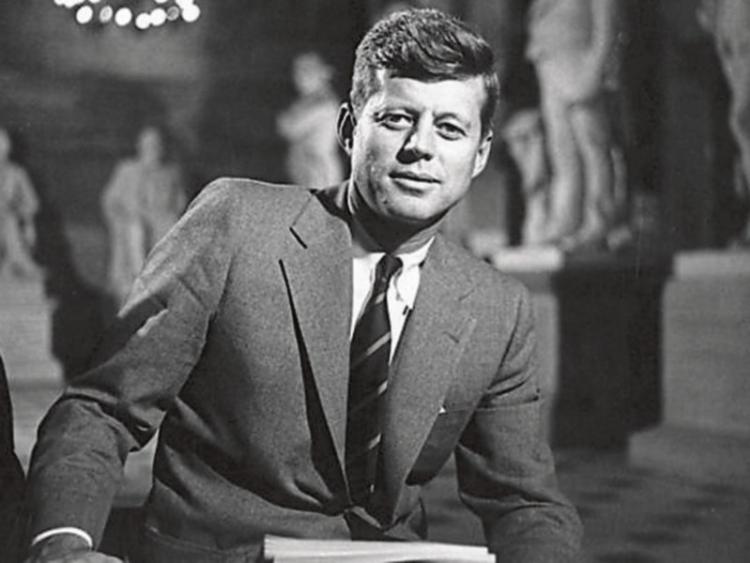 BRUFF’S links to John Fitzgerald Kennedy are well known but it has now been uncovered that the 35th President of the United States visited the town in 1947.

The revelation came from author Emma Bower and the local knowledge of the Bruff Heritage Group.

Paul Dennehy, chairperson, said it “wasn’t known” and they “thought his only visit to Limerick was in June 1963”.  Ms Bower, who is writing a book on Kathleen Kennedy [John F Kennedy’s sister] contacted the heritage group in April. Her research shows that John F Kennedy also visited Ireland in 1947.

“John, who at this stage had been elected to Congress, was returning from a trip to Europe when he decided to stop off in Ireland to visit Kathleen, who was on holidays in Lismore Castle in Waterford with her in-laws.

“New research now indicates that both of them hired a car and travelled to Wexford to trace their relatives and the following day they travelled to Bruff to visit Eleanor Fitzgerald, who corresponded regularly with their mother Rose. They were second cousins. It would appear that Eleanor got a surprise at their arrival as visitors from America would have been a rare enough occurrence at that time,” said Mr Dennehy.

The reason the visit was heretofore not known was because the dashing gentleman, aged 31, would have been introduced to Eleanor as Jack Kennedy.

“The family would always have referred to John as Jack. For many years after, Eleanor believed that a ‘Jack’ Kennedy accompanied Kathleen on her visit to Bruff. Now it’s well known but you’re going back a long time. There was no internet!” said Mr Dennehy.

“Researchers will visit Bruff in August to continue their work. If proven correct , it will strengthen the ancestral ties between Bruff and the Fitzgerald Kennedy family,” he continued.

The story began in 1852 when Thomas Fitzgerald left Bruff for the US. He married Rosanna Cox and they had 12 children. One of them John Francis (Honey Fitz) Fitzgerald went on to become Mayor of Boston and was a member of the US House of Representatives. His eldest daughter Rose, married Joseph P Kennedy, they had several children including John F Kennedy.

The bible will feature in a sculpture of John F Kennedy commissioned by Bruff Tidy Towns. It will be unveiled next month said chairman, Mark Nagle.

Continuing the theme, nominations for the fourth annual Fitzgerald Bible Bruff Award have commenced. They can be submitted at the Post Office or the Thomas Fitzgerald Centre in Bruff.