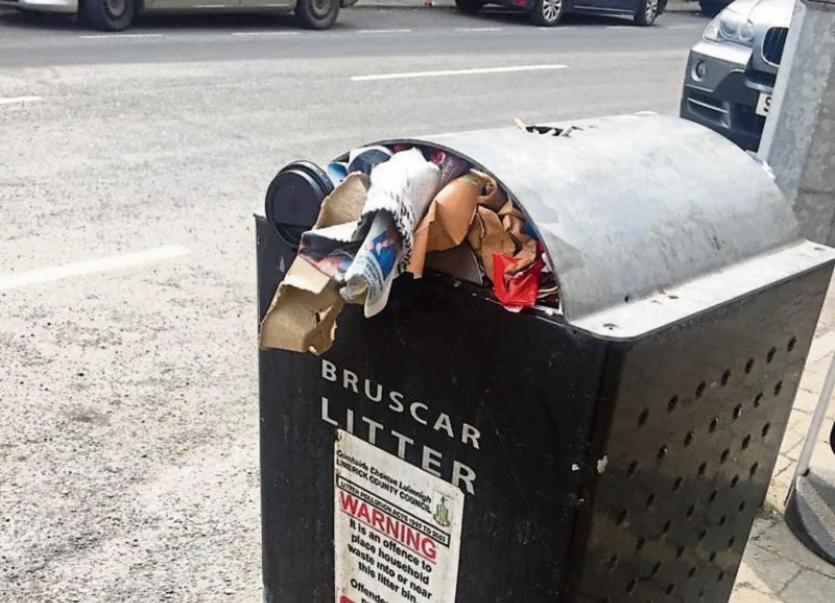 An overflowing bin in Bruff: Cllr Bill O’Donnell is furious

LIMERICK City and County Council is putting jobs for the top brass before emptying the bins, declared a furious Cllr Bill O’Donnell.

He was speaking after Conn Murray, CEO, appointed two new directors, new senior executive officers and created new departments. Yet Cllr O’Donnell said bins in Bruff are overflowing and weeds are growing up through footpaths. A full-time operative for the picturesque town retired in December and hasn’t been replaced.

“Bruff is now litter-infested, weed-infested and bins are overflowing. It is having a very negative effect on the town and a negative effect on businesses. There has been very bad feedback from tourists who have visited the town in recent times. This cannot continue.

“The people  of Bruff, and in particular the business owners and voluntary groups, are very annoyed about the failure of the council to replace the full-time operative,” said Cllr O’Donnell.

He says he is “absolutely gobsmacked” that the council seems to have endless resources when it comes to development under Limerick 2030 and appointing senior staff but are “severely lacking in delivery of basic services and appointing front line staff”.

“Are we losing sight of our core responsibilities to the people of Limerick and in particular the people of County Limerick?” asks Cllr O’Donnell. In every other business he says when you know somebody is retiring or leaving you make arrangements in advance. “It is six months on. The position should have been filled by now,” said Cllr O’Donnell.

Chairman of Bruff/Grange/Meanus Community Council, chair of Bruff Tidy Towns and owner of the town’s Eurospar, Mark Nagle said there is “huge disappointment in the town”. Mr Nagle said the streets aren’t being swept,  weeds are growing and bins  are emptied irregularly.

“It is leaving the locals to pick up litter in the mornings and evenings while other towns have a full service. There seems to be an increased reliance on the voluntary sector, to supplement  these basic services, that people just expect to be in place.

“This is all happening parallel to the recent rate review. Some businesses have seen a dramatic increase in their annual rates – two and a half fold in some cases. At the same time services are being pulled from the town. We’re asking where is this increased rates going - are they being sent in to the city or sent to other towns to develop them? We just want our fair crack of the whip here in Bruff. We’re not asking for much,” said Mr Nagle.

The Tidy Towns committee have put in huge hours pulling up weeds but with the recent weather they are growing again the second their back is turned. To compound matters, Mr Nagle says they are not allowed put down weedkiller in an urban setting under recent regulations.

“It can only be done by trained personnel through Fas or county council staff. In fairness to the council lads on the ground they are being pulled and dragged in different directions. The resources aren’t been given to allow them to give a full commitment to the job that needs to be done. Mossy Daly, who retired, was like an ambassador for the town. He did an incredible job and has been a huge loss to the area,” said Mr Nagle.

Last year, Bruff was named in TravelMag.com’s 20 most most charming towns in Ireland.

“We have seen an increase in tourism footfall in Bruff and surrounding areas.  We’re trying to grow our  tourism product.

“There have been comments from tourists about streets not being swept and weeds growing,” he said.

There was no response to a media query sent to the council.