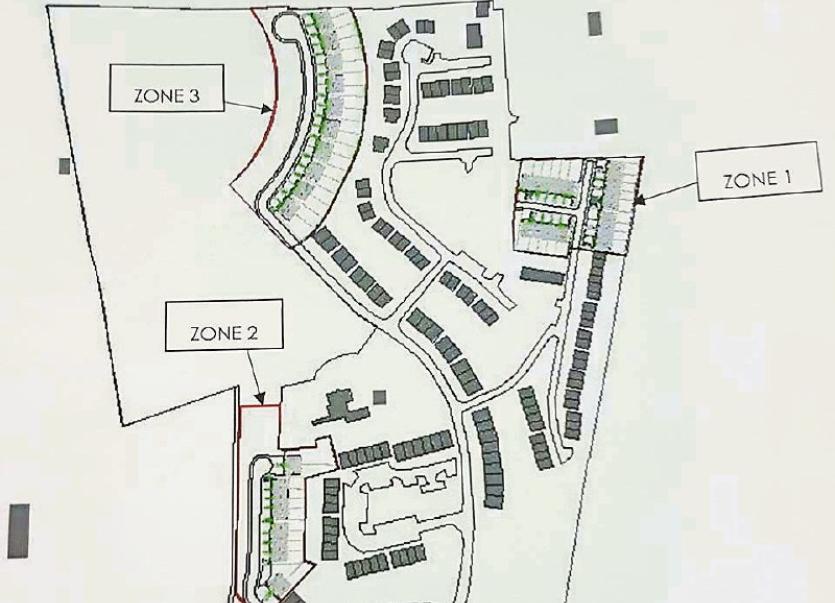 The planned new houses in Castlerock, Castleconnell are to be located in the green coloured zones on documents submitted to the council with the application

A DUBLIN-based property development company has been revealed as the buyer of 19 acres of development land at Castlerock, Castleconnell.

Last April, the Leader reported that there were four bidders in the process with Michael O’Connor, director of REA O’Connor Murphy, saying there was “good interest”. Torca Developments were the highest bidders but the price hasn’t been disclosed.

They operate from the Dublin area but are active throughout Ireland. They say their development sites range in size from 10 up to 150 units, with “emphasis put on how the scheme will contribute to the surrounding community both during construction and upon completion”.

The Castlerock development originally comprised just over 32 acres in total and had planning for 248 units, 147 of which are sold and occupied today. The built part of the estate is taken in charge by the council. It is within walking distance of Castleconnell and any houses in the estate that go up for sale are snapped up.

What was bought by Torca was the remainder of the site – close to 19 acres in four zones. A total of 102 houses were previously granted permission in these zones but all planning permissions on these lands have expired. 15 houses are already constructed to floor level.

On Monday evening, over 60 residents of the estate showed up at the AGM of Castlerock Residents Association in Bradshaw’s Bar. One of the attendees said residents have little issue with additional houses and neighbours.

”New faces are more than welcome. However, I would have some concerns about the overall planning of the estate, once completed. I believe there is an opportunity to plan the new housing blocks better, with the chance to build a ‘circular road’ within the estate. This would allow for ease of access to the new houses at the back of the current estate.

“If the proposed plans are adhered to, there will be only one way in and one way out. Meaning traffic on the already busy and narrow estate roads will be higher, as well as causing more difficulties for cars getting onto the main road in the mornings at the top of Belmont Road,” explained the resident.

The resident said that some of the new houses are to be “built on land that floods persistently”. However, included in plans submitted to the council by the developer, is that building will take place in the areas of lowest risk – one flood every thousand years.

“Where will this water go is a question that is often asked,” said the resident.

“The estate itself is already built on rather wet ground, so the displacement of a large amount of water could have an environmental effect on the existing water table. Even though the new development is effectively finishing off the original idea for the estate, now that people have lived there for 10 to 12 years, it seems that the original plans might not be fit for purpose in the current environment,” the resident added.