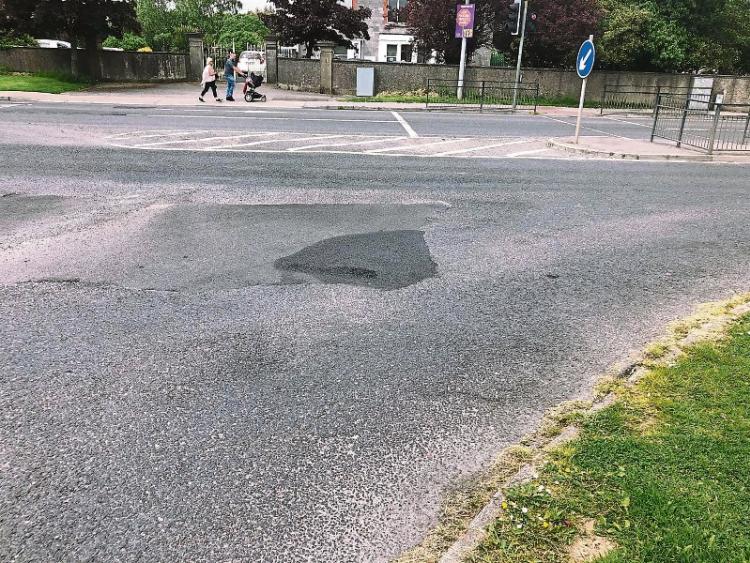 Cllr Frankie Daly sent The Leader a picture of the ‘shambolic’ reinstatement works carried out by Irish Water in March. Irish Water said it has yet to complete repair works

INCENSED Independent councillor Frankie Daly has hit out at Irish Water over its “dangerous” reinstatement road works in a busy suburb.

Cllr Daly criticised the Irish Water’s works, which took place at the junction outside St Nessan’s Church and Ballycummin Road.

He said a number of elderly people have approached Cllr Daly in relation to the matter. And now the northside politician is calling on the utility “to make safe this danger immediately”.

A spokesperson for Irish Water explained that it carried out temporary road repairs in Raheen following an emergency excavation to fix a burst water main in March.

“We would like to apologise for any inconvenience as a result of these essential works and thank the public for their patience as we complete them.”

Cllr Daly said the least locals expect is a “pothole of this magnitude on the route they are using.

“Irish Water plan to run a pipeline from Parteen to Dublin as part of a project in excess a billion euro proposal – to back-up Dublin’s water supply – yet it cannot ensure basic reinstatement works are carried out in a safe way is madness,” he told The Leader.

He said: “The public in many instances blame the council for these type of works that are carried out by  Irish water. This is a common theme across Limerick roads that are not reinstated to a satisfactory level by Irish Water –thus again causing a serious hazard and putting the public at risk. This shambolic approach to public safety needs to be addressed immediately.”

Other councillors over the past two years have brought up the issue of reinstatement works by Irish Water, with officials at council meetings.