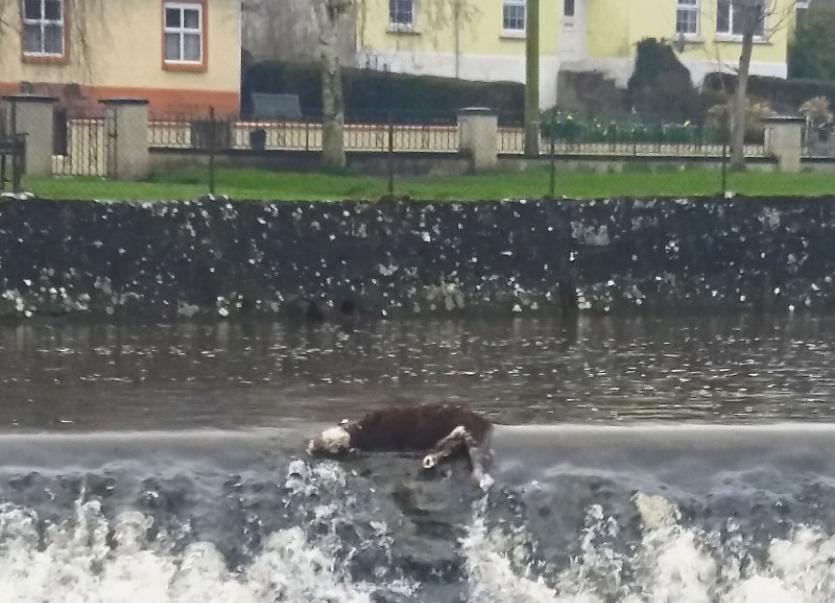 ‘Atrocious’: Dead calf caught on the weir in the pretty village of Bruree

AN ANGLER who found two dead calves with their ears cut off in the Morning Star river in Athlacca has called it “atrocious”.

A further three dead animals were found in the Maigue in Bruree by another fisherman in the last month. One was actually stuck in the weir in the picturesque village.

Eamon O’Riordan, chairman of the Kilmallock and Kilfinane Anglers Association, said he has been fishing rivers in south Limerick for 44 years.

“In all those years I have never come across one dead calf in a river and now there have been five found in the last month. Something funny is going on,” said Eamon.

“And they are only the ones we have seen. My worry is how many more are out there that we don’t know about?” he continued.

Mr O’Riordan said all the calves’ ears were cut off to hinder their identification and tracing of the owner. He says two different locations had to be used to throw the animals into the rivers.

“For tourists driving through Bruree to go to the museum or going down to the mill and seeing this dead calf straddled across the weir. That is absolutely atrocious,” he said.

Mr O’Riordan said you can imagine what a rotting calf is going to do to the ecology of the river over time and especially in this hot weather.

“It is totally illegal to do this. I thought all calves had to be registered. Fish stocks are under immense pressure at the moment. It is all catch and release, we don’t kill fish, there is no killing of trout on either the Maigue or the Morning Star or the Loobagh,” said Mr O’Riordan, who actually caught one of the dumper’s red-handed.

“Last Sunday two weeks I was fishing on the Morning Star upstream from Howardstown. I was fishing at this particular stretch when I began to hear all this rustling noise on the far bank. There is a high bank with lots of scrub on it. I saw this individual rolling something down the bank. The next thing I heard a big splash and I saw a dead calf. He was after throwing it into the river.

“He didn’t see me. I saw him turn and walk back up. I gave a cough to let him know I had been standing there. I could just see this figure going back up through the scrub. As I was walking down the river later I saw this man standing in the river by a rock. It was the same individual. He nodded at me and I nodded back.

“He said, ‘I am after throwing a calf in to the river’. I said, ‘I know, I was watching you’. He said he never saw me. I said, ‘Do you realise what you are doing? It is totally illegal’. He said, ‘My head isn’t in the right place, I’ll go up and take him out’. I watched him go and he was at the calf trying to pull him out,” recalled Mr O’Riordan.

The following day he went back to check and it was gone. Three day later Mr O’Riordan went back again and the same calf was in the same spot.

“I was shocked,” said the angling chairman, who had already reported the matter to the council.

This Wednesday, a council spokesperson told the Leader: “We have received reports about these incidents and they have been taken care of.  To date they are not very common.

“Limerick City and County Council works with farming and other organisations as well as the relevant state bodies to educate and inform people about their responsibilities when it comes to protecting our environment.”