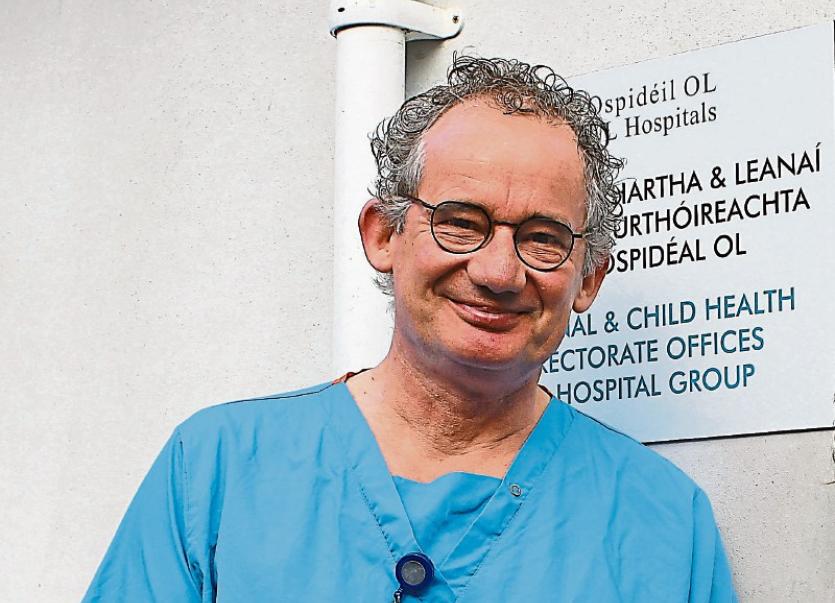 A DIRECTOR with the UL Hospitals Group has said that it is operating with a massive deficit of 560 frontline staff, as Limerick suffers from the “highest standardised mortality rate in the country”.

And the situation is so “stark”, that UL Hospitals’ clinical director for maternal and child health, Dr Gerry Burke contacted management and every TD in the Mid-West region.

In an email to TDs, he estimated that it would cost €22m per annum to bring UL Hospitals staffing levels in line with the national rate.

In an email to Prof Paul Burke, chief clinical director of the UL Hospitals Group, Dr Burke said that there are 4,065 UL Hospitals staff—7.5% of all acute hospital staff across the country.

This follows the publication of the HSE’s March 2018 employment monitoring report.

He said that the number of whole time equivalent staff at UL Hospitals is 10 per 1,000 people. There are around 400,000 people in the Mid-West.

Nationally, there are 11.4 acute hospital WTEs and 11.2 WTEs in Dublin and Leinster hospital groups per 1,000 people, Dr Burke said in the email.

“So we have almost a 14% fewer acute staff and far fewer Level 4 beds. It’s very inequitable, particularly when these rates of deprivation and the burden of disease (Limerick has the highest standardised mortality rate in the country) are considered.

“These figures are really quite stark and they explain a lot of our difficulties. I believe the situation merits a very aggressive approach from us, the senior clinicians, to ensure that this inequity is appreciated and corrected,” he wrote.

He concluded: “An extra 560 staff would have a large impact on quality and if 30% were doctors, access and patient experience times would improve.”

A spokesperson for the UL Hospitals Group said it does not have 560 vacant posts.

They are currently working on recruitment of non-consultant hospital doctors for the annual changeover in July. Any vacancies, she said, would be “minimal” and would range between three and 10 WTEs.

She said that UL Hospitals faces a “significant challenge in meeting the global shortage of nurses”, with vacancies of around 40 permanent posts.

The spokesperson added that ongoing recruitment includes monthly interviews, fairs in the UK and Ireland, use of an agency, and advertising of vacant positions.

Figures released by UL Hospitals show that they have increased the number of medical, nursing and social care profession positions by 372 in February 2018 since February 2016.

In the email to TDs, Dr Burke said: “The increase in WTE to bring us in line with the national rate would cost perhaps €22 million per annum. Of course, prudence with public money goes hand and hand with quality and safety: ULHG is utterly committed to providing first-rate clinical services at an affordable cost to the State. Consequently, bringing the WTE number into line with the national rate would be genuinely transformative.”

“As Dr Burke points out, this can go all the way to higher levels of morbidity in the region. It is having real impact. So I am calling on the HSE to explain these figures, to go through them in detail, and if I don’t get adequate answers very soon, I am going raising this in the health committee and on the floor of the Dail.”

Deputy Kelly added that it was a “very brave decision” by Dr Burke to make this information public.

Fine Gael TD Tom Neville said that he will be meeting with the Minister for Health Simon Harris on the issue.

He said that the HSE’s recruitment process needs to be investigated. “My opinion is that it is too rigid and too centralised and does not react quick enough to idiosyncrasies and changes in the market.

“We need a model that is more flexible and more geared towards the local demands and local shortfalls and also the local market in which people are living.”