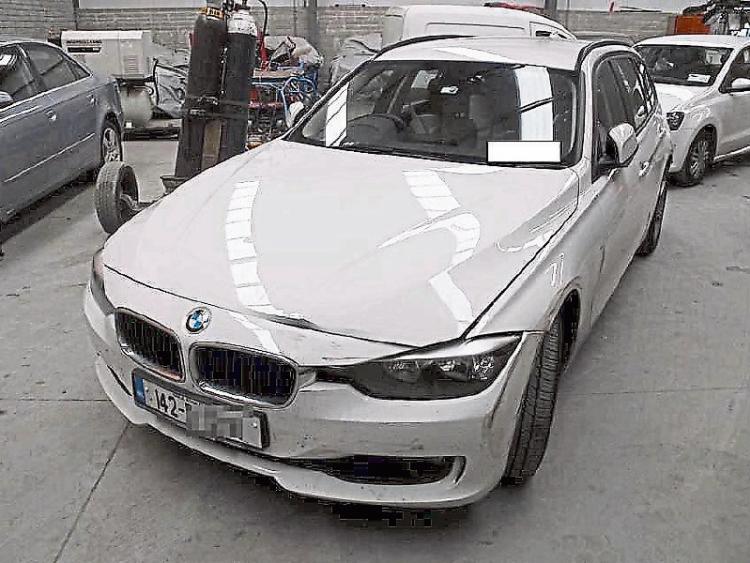 A high-powered BMW was stolen

TWO young men who caused thousands of euro worth of damage during a rampage at an underground car park in Limerick have each received lengthy prison sentences.

Two apartments were broken into on November 20, 2016 and a Renault car taken from outside. The vehicle was later found burned out.

Detective Garda Keane said several other vehicles were damaged and various property stolen by the culprits.

The defendants returned to the car park the following night and stole a second car – an Audi A3 – which was later found in a “crashed state”.

Judge Tom O’Donnell was told a total of 29 vehicles were either damaged or broken into during the rampage at the car park.

Summarising the evidence, the judge noted that “any item that could be taken was”.

The stolen property included laptops, phones, cash and sunglasses and various other valuables.

CCTV proved instrumental in identifying the culprits and DNA found in the Renault was connected to Mr Corbett who admitted he was a passenger in the car after it was stolen.

Both men received sentences totalling three years’ imprisonment in relation to the offences.

Ambrose, received a consecutive 18 month prison sentence for his role in a separate crime spree which took place on dates in August 2016.

In relation to that case, Judge O’Donnell was told the defendant was one of a number of young men who broke into a house in Dooradoyle and stole a high-powered car.

Ambrose and another young man, who was a juvenile at the time, admitted travelling to Pallaskenry where they tried to break into a number of other vehicles.

However, they were apprehended by locals and detained pending the arrival of gardai.

A number of other young men previously pleaded guilty to their role in that incident.

Sentencing Trevor Ambrose, Judge O’Donnell noted he has a number of previous convictions and was on bail at the time.

He noted he has suffered from behavioural challenges since he was young and that has had problems with substance abuse.

He said his co-accused, who is now aged 20, had “mixed with the wrong crowd” when younger and had “slipped into substance abuse”.

The judge said the offences had caused “disruption, upset and inconvenience” for each of the property owners and he commented that the level of wanton disruption was a significant concern for the court.

While noting that Ambrose’s co-accused was the youngest of the culprits, he said a custodial sentence was warranted.

There were angry scenes in the public gallery of the court as relatives and friends of the defendant reacted to the imposition of the prison sentence.