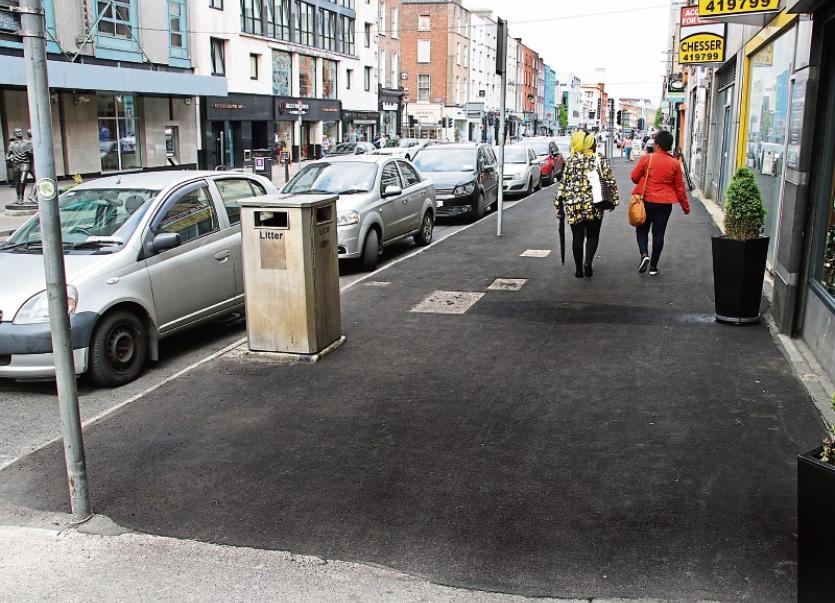 The ‘ecoflex’ tarmac that has caused considerable disquiet in the city Picture: Adrian Butler

THE option of pedestrianising part of O’Connell Street in Limerick was put to the public – but was never included in the council’s initial revitalisation plan.

In a week where Limerick City and County Council has faced fresh criticism over new tarmac layering on its main streets, and a delay to the flagship €9m redevelopment scheme of O’Connell Street, this is likely to raise more questions of the local authority.

Documents shown to councillors this week reveal five options were given as part of the council’s second public consultation phase for the 'movement of traffic’ on the scheme, which may now not get under way for 14 months due to planning delays.

Crucially, one of these options provided for pedestrianisation between William Street and Roches Street.

But the initial plan – presented last summer – did not see the vehicle ban many were anticipating, instead seeing one lane of traffic heading outbound from Denmark Street up to the O’Connell monument.

The proposals were derided by many parties for not going far enough, with former secretary general at the Department of Finance John Moran in particular critical.

And there was more criticism of the council this week following the laying of new ‘Ecoflex’ tarmac covering this week in the city centre.

Chamber chief executive Dr James Ring said: “It’s crazy, I haven’t heard one person who thinks it’s okay. It’s almost like adding insult to injury in that for the last two years, we are talking about O’Connell Street being beautified, and then we see the most ugly looking thing applied to our street.”

For its part, the council says the layering is an interim solution, with the revamp of the main thoroughfare will include a new surface for O’Connell Street.

But businesswoman Helen O’Donnell said: “My question is that it is also on Catherine Street and Roches Street and these streets are not going to be part of the O’Connell Street. So what will happen there?”

She acknowledged there is a need to make some of the urban footpaths safer, but added: “It looks very scrappy”.

A spokesperson for the council said Ecoflex is the “most economical” solution on the market.

But Ms O’Donnell said: “We have lovely cobble-lock in some areas, but this just looks awful.

“It’s so disappointing as we are a significant city.

“People are talking about investing in Georgian buildings, then we see this happening.”

Mr Moran said: “It would be difficult to give it ten out of ten for aesthetic quality.

“It’s unfortunate that instead of seeing grass on the footpaths, we now seem to see road surfacing on the footpaths reinforcing the dominance of vehicular traffic in the downtown area.”

Instead, he said artificial grass could have been an “interesting experiment” as a new surfacing.

It emerged earlier this week that the revitalisation plan for O’Connell Street will be decided by An Bord Pleanala.

Normally, public projects like these are decided upon by councillors, under ‘part eight’ planning legislation.

But council official Joe Delaney confirmed the national appeals body will adjudicate on these proposals, because of the fact that traffic will be restricted, businesses will be impacted and building will take place around protected structures.

Cllr Daniel Butler criticised the move, saying: “What a part eight would have allowed us to do is put in more changes if we wanted. local control has gone to Dublin.

If the council were brave enough to make a decision and keep it part eight, we could have had further consultation if we were not happy.”