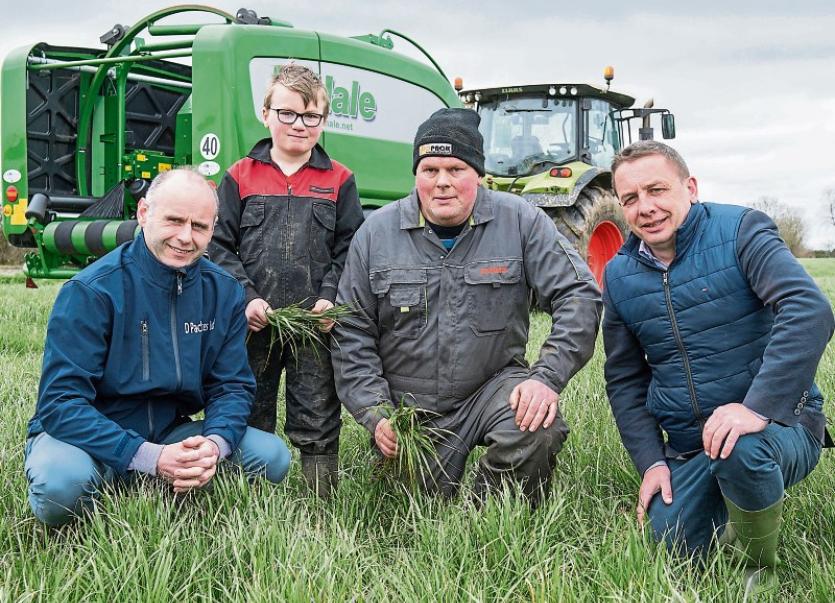 IT IS HARD to believe a few weeks ago that lorries full of fodder were rolling off boats at Irish ports.

Now the silage season is in full swing. It started a couple of weeks ago with farmers making bales in fields that got strong. Pat Halpin, a contractor in Knocklong, started pit silage last Friday, and due to the weather this week he said it would be full steam ahead.

With the fodder crisis fresh in people’s minds there is sure to be extra stored away on Limerick farms this year.

“We were buying fodder ourselves,” said Pat, who farms in Lackelly with Carmel and their five children – Katie, Padraig, Oonagh, Emily and Trish.

They have a spring calving herd of 350 Holstein Friesian cows and supply Dairygold. Cows are milked in a 32 unit herringbone parlour.  If that wasn’t enough to keep him busy Pat started a contracting business in 2009.

Due to the sun he said any silage they have made this year has been top quality. The big difference compared to last year is the increase in diesel prices.

“It’s a savage rise. It’s nearly 40% up on this time last year. It is a huge increase in contracting costs.

“I can appreciate it from both sides and milk price has fallen,” said Pat, who is very thankful to local farmers who have made his contracting business such a success.

Last year, he made 17,000 bales of silage and all but 700 bales were wrapped with Baletite even though it costs an extra euro per bale over netwrap.

Baletite is an innovative 5 layer pre-orientated film that replaces traditional netwrap in round silage bales. Specifically created for the next generation of baling machines that can apply film instead of net, such as the McHale Fusion 3 Plus, Baletite has been designed to enhance the ensiling process and protect the bale contents.

Being a film,  Baletite  provides an additional air barrier whilst helping to retain a better bale shape by exerting a tighter grip around the bale circumference.  Plus it reduces wastage of valuable silage wrap, as, unlike netwrap, no baled fodder can become enmeshed in it.

Its production from the same base material as Silotite balewrap means users don’t have to separate the Baletite from balewrap after use.  Instead, both Baletite and the accompanying balewrap can be recycled together thereby saving valuable time and labour costs. As a farmer himself Pat knows how important silage quality is for milk production and liveweight gain.

“Silage is sweeter and there is no mould so my customers appreciate this and had no problem switching to the new film and  film system,” concluded the very busy contractor.