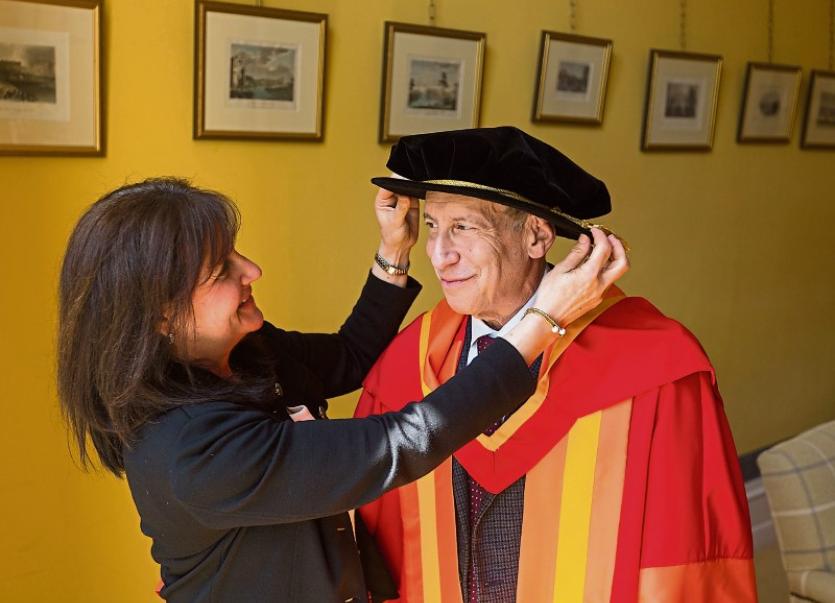 Professor Robert Langer is helped with his robing by his wife Laura in UL Picture: Oisin McHugh/True Media

THE University of Limerick has honoured one of the most influential engineers in the world, whose work has been of "benefit to billions of people".

An honorary doctorate was presented this Wednesday afternoon to Professor Robert Langer, described by Harvard Business Review as the “Edison of Medicine”.

He is credited with improving the lives of more than two billion people worldwide through his work in developing novel drug-delivery systems.

“University of Limerick prides itself on excellence and providing an education that enables successive generations to fulfil their potential and make a difference in the world. Professor Langer clearly embodies that excellence, having made the kind of difference that most of us can barely imagine. He is a role model and an inspiration,” UL Chancellor Mary Harney said at the ceremony.

Professor Langer, who has written more than 1,400 scholarly articles, is the most cited engineer in history. He has over 1,300 issued and pending patents worldwide and his patents have been licensed or sublicensed to more than 350 pharmaceutical, chemical, biotechnology and medical device companies.

Chemistry lecturer at UL, Dr Sarah Hudson, a postdoctoral researcher in Professor Langer’s lab at Massachusetts Institute of Technology from 2006 to 2008, read his citation, hailing the “truly remarkable” scale of his achievements.

“His work over a period of four decades has been unparalleled in terms of its innovation and its benefit to billions of people the world over,” she said.

“Through his creativity, selflessness and ability to dream big, Bob Langer has touched the lives of an incalculable number of people. We were honoured to host him at UL last year as a Bernal Distinguished Lecturer, and it is with the utmost respect that we welcome him back today to honour him with this award.”

While in UL, Professor Langer officially opened the Bernal Bio Laboratories, two new labs that form part of the Bernal Institute at the university, as well as taking part in a seminar series with researchers, students and academics.

“I am very proud to be conferred with an honorary doctorate in engineering by University of Limerick. As a young university, UL is fast-developing a reputation for innovative research,” he said.

“The work being undertaken here has the potential to change the lives of so many people and these new laboratories present a great opportunity for UL researchers to continue their cutting-edge work in the areas of bioengineering and bioprocessing in a state-of-the-art environment.

“Applying critical thinking and challenging established ideas are key tenets of pioneering research and they have never been more important. I very much look forward to seeing significant research developments emerge from this university in the years to come,” he continued