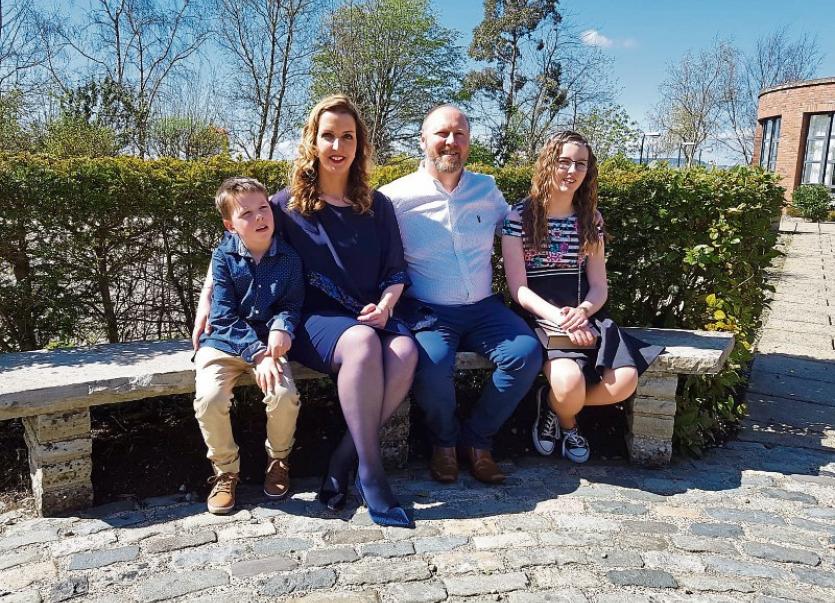 Vicky and Jim Phelan with their children Dara and Amelia. On the day Vicky’s High Court action was settled, Jim had been due to take the stand

AS the institutions of the State continue to pass the buck for the cervical smear scandal, Dara Waldron reflects on the day he spent in the High Court with Jim Phelan, when the Vicky Phelan case was settled - a day when the word ‘accountability’ rang loudly in the halls of justice.

I never thought I’d sit through one of the biggest cases in Irish history. Jim Phelan rang me on a Saturday to ask me if I’d accompany him to the High Court that Tuesday.

It would be just the two of us, as he didn’t want his family there when he would give personal testimony.

It was the day he would take the stand. He was nervous of what would come up. Vicky would be on standby at home.

I was somewhat taken aback by the phone call. I thought ‘why me? What would I be able to contribute to help? I suppose I’d keep him relaxed, so that when he had to he could speak candidly. I got my bearings, mentioned Jim’s call to Ylva, my wife, and once things were in place, sent a text to confirm I’d attend.

I felt good to be asked. After texting Jim, Vicky messaged straightaway to say thanks.

She wrote that Jim was extremely nervous about taking the stand, uptight about having to talk about the impact her cancer had on him.

A lot of personal stuff would be brought out into the open. I thought about this and planned to just keep everything relaxed on the day.

I’ve been friends with Jim and Vicky a long time. We were neighbours for ten years. I remember when Vicky told me she had cancer in 2014. I remember the ‘best side out’ mentality she pretty much patented at the time. I needed to take a similar approach.

We both thought the day we travelled to the High Court was one of many, but it turned out the day the case ended.

Jim was supposed to give evidence before a specialist doctor from the UK, who would report on medical matters.

But there was a long delay when we arrived, and when the doctor, Professor John Shepherd, came from London, it was decided he would give evidence before Jim (he had to get back to London that evening).

I thought we’d have to sit through a long analysis before Jim could do his stuff.

I was nervous about Jim taking the stand. I would feel partly responsible if things went wrong.

When the Professor began testifying we thought of going for coffee; to make sure hearing the cold hard facts of Vicky’s diagnosis didn’t upset Jim.

But we stayed to listen simply because we didn’t want to get followed by reporters outside. Soon the testimony had us transfixed.

The Professor kept returning to the patient’s right to know; kept focusing on open disclosure as a fundamental right. As the barrister led him through, he kept repeating that Vicky had a right to know.

I thought I knew what Vicky had been through since 2014 but there were times the testimony regarding Vicky’s medical history had me holding back tears. I could feel myself getting angry. However, my anger was part of the shock and sadness you could feel permeating the court.

I remember two words specifically in this regard: ‘ducking and diving.’

Professor Shepherd used these to describe the dilly-dallying in the HSE. There was ducking and diving across the board; professionals shirking their responsibility.

You could feel the tension in the courtroom, not least for Jim who was yet to testify. He was still waiting. I wondered if the doctor’s testimony brought back memories for Jim, made him angry too, because it brought back painful memories for me.

I remembered Vicky answering my wife’s call in late January to say she was down the country working on her case.

This courageous mother, who had just been diagnosed with terminal cancer, was seeking out legal help; intent on bringing those who ducked and dived to account.

Now I was with her husband in the High Court, both of us a cog in the justice wheel. How had our simple life come to this?

When Professor Shepherd spoke about offering legal representation to patients regarding similar cases in England and Wales I thought of Vicky travelling the country pleading her case, with terminal cancer, in the dark of January. I expected to wake up at any moment from this nightmare; told it was all a dream. None of it was real.

But it was real, very real. The Professor finished and Vicky’s barrister requested that the court continue to hear Jim’s testimony, given he had travelled for the day.

Then everything turned. No sooner had the solicitors suggested waiting until the next day then I was asked to wait while Jim chatted with the legal team.

I hung around for twenty minutes and then gestured to Jim that I’d head out the back towards Smithfield, make my way to a pub to watch some of the racing.

I didn’t feel like having a pint, even though it seemed the right thing to do. Then Jim rang to say the case had been settled for two and a half million euros, with no confidentiality clause, and that he’d make his way to meet me.

I walked down towards the tram and saw him walk toward me in the distance.

We walked along the canal in a daze. Neither of us spoke much. I suspected we were thinking the same thing; that the kids were financially looked after. It was important. But it wasn’t enough. How could you put a value on Vicky’s life, on a mother’s life?

We went to a hotel to await our train and I tried to buy Jim a pint to mark the case ending, but he said I shouldn’t have to put my hand in my pocket.

We both knew the road that lay ahead. We didn’t need to talk about it. The day was a fence jumped in what would be a long race.

When we returned to Limerick I chatted briefly with Vicky. I told her about the doctor’s testimony, how much she would have enjoyed it.

Leaving court, I felt honoured to have been a witness to the Professor’s testimony. In a country where holding power to account can often seem an impossible task, moral courage had won the day.

For this reason, I was buoyant hopping into the car, but when I stopped briefly at traffic lights, tears began rolling down my face.

All the repressed emotion from earlier began to resurface. I suddenly became overwhelmed with sadness, as I recalled one particular detail from the day.

I remembered the moment when Prof. Shepherd turned to Jim as we left the court and said ‘I’ll do whatever I can for Vicky.’

It was a genuine moment of real compassion when the world itself seemed so shorn of compassion.