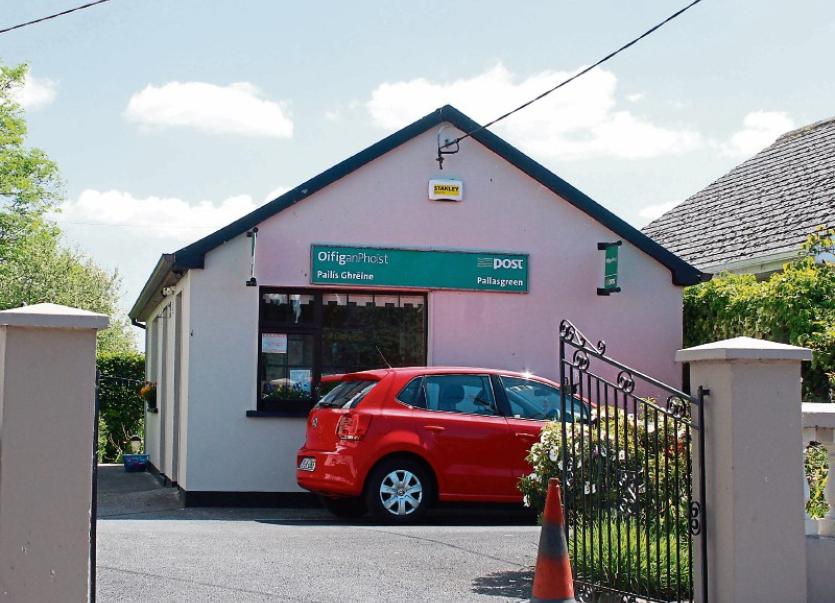 A PENSIONER who was threatened by an armed raider during an attempted robbery at a rural post office in Limerick has described how he wants to put what happened behind him.

The 66-year-old was working as a locum at Pallasgreen Post Office when the culprit who was brandishing a large knife entered the premises and demanded that he hand over cash from the till.

Nigel Coleman, aged 21, who has an address at Vale Drive, Oola; Jonathan Phillips, aged 27, of Clonlara village, Clonlara, and Dean Phillips, aged 22, of Lenihan Avenue, Prospect, have pleaded guilty to charges relating to the incident which happened on May 26, 2016.

During a sentencing hearing this week, Garda Chris Cowan said the raider – Nigel Coleman – entered the premises shortly after 4.30pm while his co-accused waited in a Seat Inca van which was parked in the car park of the nearby Centra store.

He said having entered the post office, which is located across the road from the local garda station, Coleman demanded cash from the till.

The pensioner, he said, refused and told him “to go away in strong terms” before retreating to a back room and pressing the panic button.

Mr Coleman, the court heard, was inside the Post Office for 32 seconds in total.

Judge Tom O’Donnell was told while the local garda was on duty when the incident happened she was not at the garda station in the village.

Garda Cowan told Lily Buckley BL, instructed by State Solicitor Aidan Judge, the pensioner was in fear “for some time afterwards” but has made a good recovery since.

“He just wants to put the incident behind him,” he said adding that had declined to opportunity to deliver a victim impact statement.

Limerick Circuit Court was told all three defendants were identified on CCTV and that they can been seen on the footage scoping the area several times prior to the incident.

Garda Cowan said an off-duty garda had also noted the registration of the Seat van as it had “spiked an interest”.

The defendants were all arrested a number of weeks after the incident with all three making admissions.

Nigel Coleman has no previous convictions while Jonathan Philips has 123 and Dean Philips six.

Aaron Desmond BL, said his client – Nigel Colemen – had not intended using the knife and that he had it to “purely scare” the pensioner. He added that his client had cooperated with gardai following his arrest.

Eimear Carey BL, representing Dean Philips, said her client accepts what happened was distressing for the injured party. She added the 22-year-old is making efforts to address his drug problems and that he has not come to the attention of gardai since the attempted robbery.

Antoinette Simon BL said Jonathan Philips had a “fractured upbringing” and that he received over 120 stitches when he was attacked late last year.

Judge Tom O’Donnell was told all three defendants were remorseful and several reports were submitted to the court for consideration.

Having heard the evidence and defence submissions, he said he viewed the matter very seriously.

He reserved judgment indicating he will finalise the matter in July.