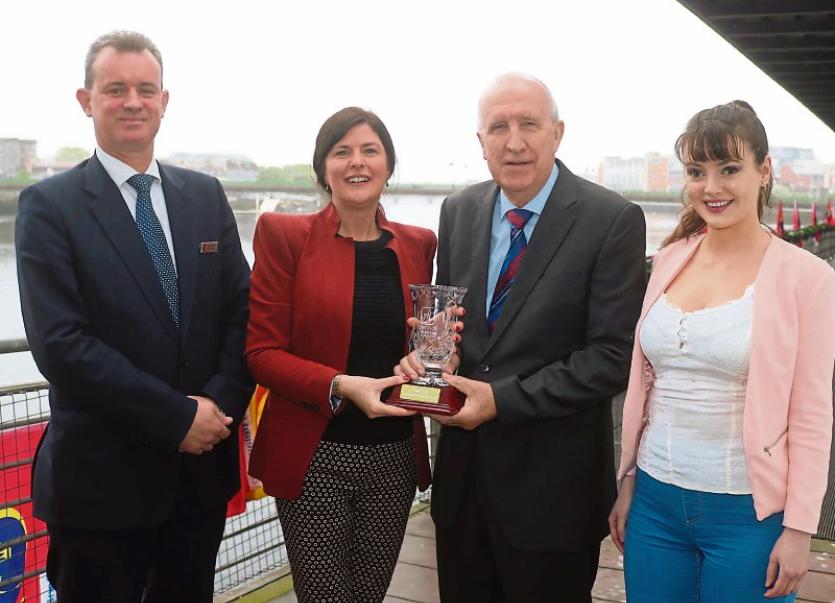 A DOON man who has helped change the lives of hundreds of children affected by the Chernobyl disaster has been named the Limerick Person of the Month.

Donal Ryan was an instructor with the Limerick Civil Defence when he was asked on one occasion to accompany a group of Chernobyl children travelling by coach from Shannon Airport to Clonmel.

“That was in 1998 and as a result of that I got the idea that perhaps I could start an outreach group in my own area of Doon,” recalls Donal at the person of the month award presentation at the Clayton Hotel where he was accompanied by his wife Joan.

Since 1999, the Mulkear Outreach Group has hosted in the region of 350 children affected by the catastrophic nuclear accident which occured in Chernobyl in 1986.

“I am receiving this on behalf of the Mulkear Outreach Group,” smiles Donal.

There are two specific times of the year when the children visit - Christmas and in the summer.

Children who visit range in age from eight years to 18 years. At Christmas they stay for three weeks and during the summer they generally stay for one month.

“The children who come are mostly from radiation areas and because they are continuously taking in the radiation, their immune systems are low and they are open to everything.

“When they come to us, over the month their immune systems can clear to maybe 80%. That can last for quite a while,” says Donal.

The children touch down at Shannon Airport before making their way to the various homes.

“Joan and I get a permit to go aeroplane side and we meet the children as they come off the plane and get them through very easily which is a great help.”

The children who arrive through the Mulkear Project go mostly to east Limerick while some go to Newcastle West, Askeaton, Crecora, other parts of west Limerick and west Tipperary.

As well as hosting the children, the Mulkear Outreach Group are involved in a number of different initiatives.

They have paid for a huge industrial washing machine for an orphanage and have bought an ambulance.

“Myself and Matt Collins, a neighbour of mine who is also a member of the outreach group, we drove it out to Belarus.

“We left the ambulance there in one of radiation zones and flew back.”

The Mulkear Outreach Group have also bought a Home of Hope.

“There is a huge amount of children in dilapidated orphanages who are very poorly looked after. There are up to 10 children out of orphanages with carefully vetted foster parents, so this is a home for life. Children generally don’t have any dental care, and if they have it can be done rough and ready with no anaesthetic.

“There is a couple from Tralee, George and Mary Sugrue and in conjunction with a number of different dentists, they go out and do some dental work.

“This year we bought a mobile dental unit so they can reach places where there is no power,” Donal explains.

“We do various fundraising. We do quite a share of church gate collections in various parishes. Different organisations have been very good to us.”

While the Ryans don’t host children at Christmas time they do take them in at summer and expect to host two children this summer.

“When the children initially come they are shy because everything is new to them - toilet facilities, food and technology. Funnily enough, you will see children with mobiles,” Donal smiles.

The children, he says, are in awe of the mountains in Ireland “because Belarus is a very flat country”.

“We usually do our shopping in the Crescent Shopping Centre and if the children haven’t been there before they are agog.”

“You treat them like your own kids,” smiles Joan, before giving the last word to Donal.

“I’m retired, I worked in Eircom and Telecom - life was pretty good to me and I wanted to give something back.”

Donal and Joan who reside in Doon have three daughters Brenda, Siobhain and Fiona, and three grandchildren.