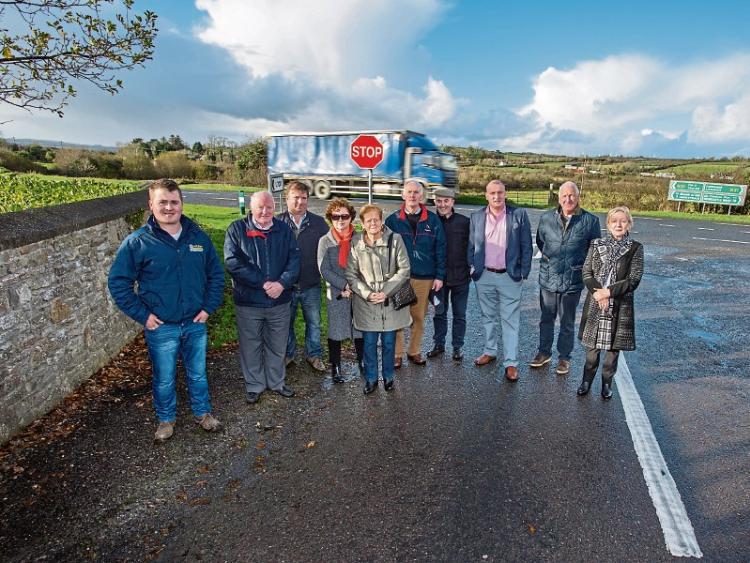 Concerned citizens who use Ward’s Cross on the N21 outside Abbeyfeale last year demonstrated in favour of safety measures, including a right hand turning lane, at their junction

WARD’S Cross outside Abbeyfeale in County Limerick is the only new junction along the N21 from Newcastle West to the county bounds which Transport Infrastructure Ireland plans to upgrade with safety features.

But Cllr Liam Galvin has vowed he will continue his campaign until all 17 junctions currently without right-hand turning lanes along that stretch of the N21 have been made safe.

“I welcome the development at Ward’s Cross,” he said. “People are taking their lives in their hands there on a daily basis. But I am very, very disappointed that it is the only junction. I will not be letting this go. I am determined to see all of them done.”

But the residents near Wards Cross were not alone in their fears.  At subsequent meetings of the Newcastle West Municipal District and a special meeting of Limerick City and County Council, it emerged that just seven junctions  between Newcastle West and the Kerry border had turning lanes.

But there were 17 others, including Wards, with no turning or stacking lanes and the people using them were at daily risk.

At that time, Cllr Galvin argued for a  rolling programme to be drawn up which would address safety issues at one or two junctions each year.

In January, a list of six junctions out of 17,  was drawn up and sent forward to Transport Infrastructure Ireland (TII). They were  Wards Cross, Tullig/Forge, Templeglantine GAA, Dunakenna, Brosna/ Rockchapel and Dromtrasna.

Along with the list, Limerick City and County Council asked for funding to carry out a detailed survey and design for the introduction of right hand turning lanes at all six junctions.

But the TII responded, saying that only one junction, Ward’s Cross, merited further investigation based on their most recent analysis of collisions.

The council, TII said, was not precluded from submitting a feasibility report for safety improvements at other locations but preparation of these would not be funded by the TII.

Now, Cllr Galvin has been told, this would require significant resources to be invested by the council and this money is not available.

Meanwhile, technical staff  with the council are working on a design for  an appropriate scheme to deal with the safety issues at Ward’s Cross and will  cost the scheme before submitting it to the TII for their approval.