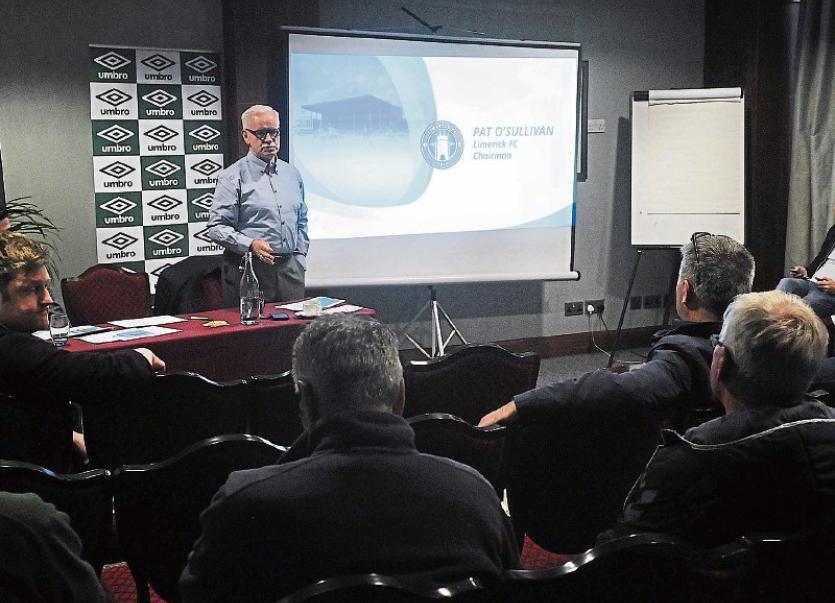 LIMERICK’s only senior soccer club could be forced to go part-time unless new investors are found, one of its top executives has warned.

Kieran Judge, the operations manager with Limerick FC was speaking at an event to raise support for the Super Blues at the Savoy Hotel.

Around 50 people were present at the event, which was also addressed by club chairman Pat O’Sullivan, first team manager Tommy Barrett and other officials, including Barry Lynch of the community-based Reclaim Limerick scheme.

Mr Judge said: “The strategy is to go part-time and sustain the club and live within our means. We cannot keep doing it like this.”

However, speaking after the meeting, Mr O’Sullivan played down these remarks, saying: “Kieran was talking from a common-sense perspective.

“There are five or six clubs part-time in the league. All these questions will be answered by what kind of financial support is going to be made available to the club.”

Before this Airtricity Premier League season began, Mr O’Sullivan of Ballylanders expressed his desire to sell a majority stake in a club which he has invested €6m in since taking the reigns in 2009.

But he said that since he made a public video statement, just one offer of support from “corporate Limerick” has arrived – from taxi company owner Tommy Daly of Moyross.

And he criticised those who question the set-up of the club, saying that it is constrained by budgets.

“Every penny to run this club comes from me. People forget that. There is an awful lot of wealth in this city.

“Look at some sports, which are extremely well-funded. We find it very hard to attract serious sponsors. It is €120,000 a month for us to run this club. This kind of expenditure only gives you a good chance of finishing sixth or seventh,” he said. “Please don't black-guard our  coaches and players for their efforts when we are competing against people able to pay three times the wages we’re able to afford.”

The meeting heard that Limerick FC bosses spend around €150,000 a year renting out facilities, including pitches at the University of Limerick.

But on a more positive note, plans for Bruff were unveiled, with Mr Judge saying once the club is able to fully move in, it will eliminate these overheads.

The plans for the old convent in the town include wedding and banqueting facilities, and space for small companies, which would provide much needed rental income to the side.

A full three-dimensional video rendering of the new site, outlined how the ground floor would be entirely used by those who train in the facility.

The existing chapel will be restored and opened to the public, while on the upper floors, there will be a museum dedicated to Limerick FC, luxury apartments, and 12-state-of-the-art en-suite rooms.

Seven soccer pitches and one GAA pitch will be included on the ground, with a 1,100 seater stand.

All money raised from Kirby O’Sullivan Park will be pumped straight back into the club, bosses said.

However, it’s likely when it takes off, it will be under new management, as Mr Judge told the meeting that he and his fellow directors had informed Mr O’Sullivan they would leave at the close of this campaign.

Mr O’Sullivan pledged to give 20% of Bruff “free” to any majority investor in the club.

“Bruff will be worth a fortune when it is completely finished,” he said. “The straight answer though is, I want to sell the club.”

The club chairman called on the council to donate half of the money it gives to the FAI’s regional development programme – €50,000 – to the club to administer themselves.

“It would allow us to independently fund our under-17s soccer, our ladies and senior side,” Mr O’Sullivan said.

Above all, he called on the supporters of the current Limerick FC side – which is languishing second bottom of the division – to temper their expectations.

“If you want top four football in this town, someone is going to have to put their hand in their pockets. Stop the wild expectations,” he concluded.