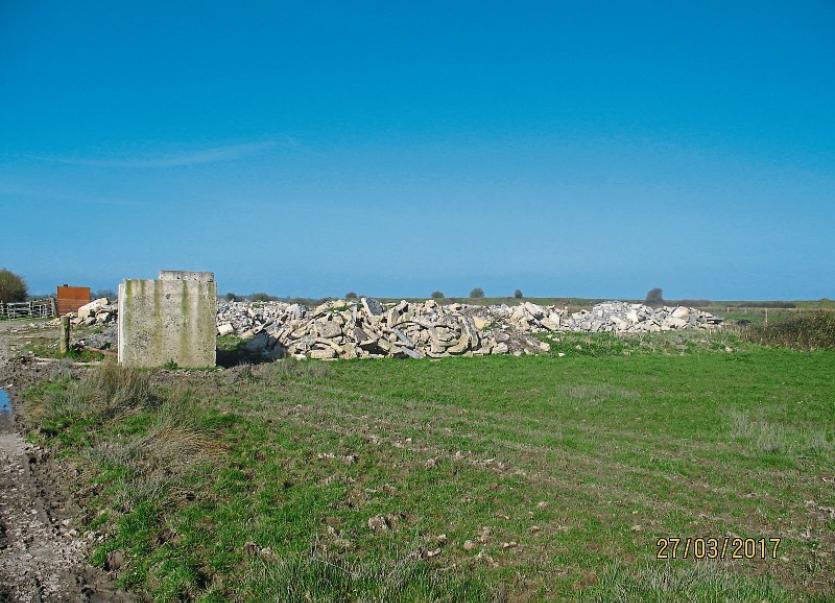 Photographs of the rubble which was dumped at Newtown, Clarina were produced in court

A MAN who failed to pay a ‘landfill levy’ after eight tonnes of construction waste were dumped on a site he owns has been fined €1,000 at Limerick court.

In the first case of its kind locally, John McMahon, who has an address at Castlequarter, Cratloe was prosecuted by Limerick City and County Council for not paying the levy under imposed under the provisions of 2015 waste management (landfill) regulations.

At Newcastle West Court, solicitor Will Leahy, representing the local authority, said the defendant is the registered owner of a site at Newtown, Clarina where the rubble – consisting of metal and concrete – was dumped in December 2016.

Executive Engineer, Dermot Lambe said Mr McMahon was instructed to clean up the site and that there was ongoing contact with him.

However when he failed to remove the rubble, Mr Lambe carried out further research before meeting the defendant on March 30, 2017.

He said he formed the view the best way to regularise the situation was to impose a landfill levy in accordance with the regulations. “We could not just leave it as a fait accompli” he told Mr Leahy.

A levy of €600 (€75 per tonne) imposed last September was not paid resulting the court proceedings.

Convicting Mr McMahon, Judge Larkin fined him €1,000 and ordered that he pay the costs of Limerick City and County Council totalling €824.36.

Mr Leahy confirmed the landfill levy must still be paid.