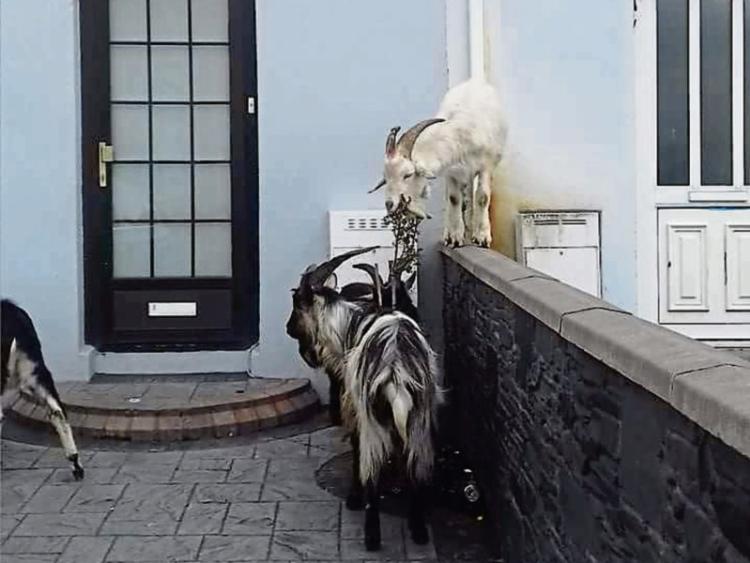 Two of the goats spotted by a reader in Kileely

THE herd of at least seven billy goats spotted roaming around Thomondgate in Limerick city have been removed from the area, a local councillor has confirmed.

The flock had been spotted running free, grazing in gardens and perching on walls in New Road, Thomondgate,  O’Dwyer’s Villas and in Kileely.

The goats were understood to be relatively placid but local residents had concerns over health and safety, as well as being concerned for the herd’s welfare.

There was also reports of lawns and shrubbery being damaged by the goats, as well as minor damage to cars.

“The goats are gone. As the saying goes, we haven’t seen sight nor heard of them since,” Sinn Fein councillor John Costelloe confirmed.

Cllr Costelloe consulted with the director of services in Limerick City and County Council who advised that the goats were removed from the area this week.

“I hope to an animal sanctuary somewhere,” cllr Costelloe added.

“One lady even snapped a picture of the seven goats roaming down the street together. The quietest street in Limerick probably, down by the river,” he added.

Limerick Animal Welfare confirmed that it has not taken in the herd.

A young kid goat, believed to be part of the flock, was taken in by the LAW Sanctuary last week as it seemed to be in distress and its mother could not be located.

The kid goat is doing well now and has been relocated to Avalon Animal Rescue.

There has been calls for a nature trail or park in the area where the goats were roaming, cllr Costelloe said.

“In terms of a nature park, I wouldn’t like to see wild animals running around the place but you could have a nice nature trail in that particular area.”

“It could be lovely and its facing the river as well.”

“It's definitely a nice long term project that I would like to see come to some sort of fruition for the residents and indeed the Northside,” he added.

“We have a housing crisis but there’s land around the city where we can build houses and we need a bit of green in the area, as opposed to just concrete and brick.”

“We need a bit of green. It's a long-term project but one well worth looking into.”