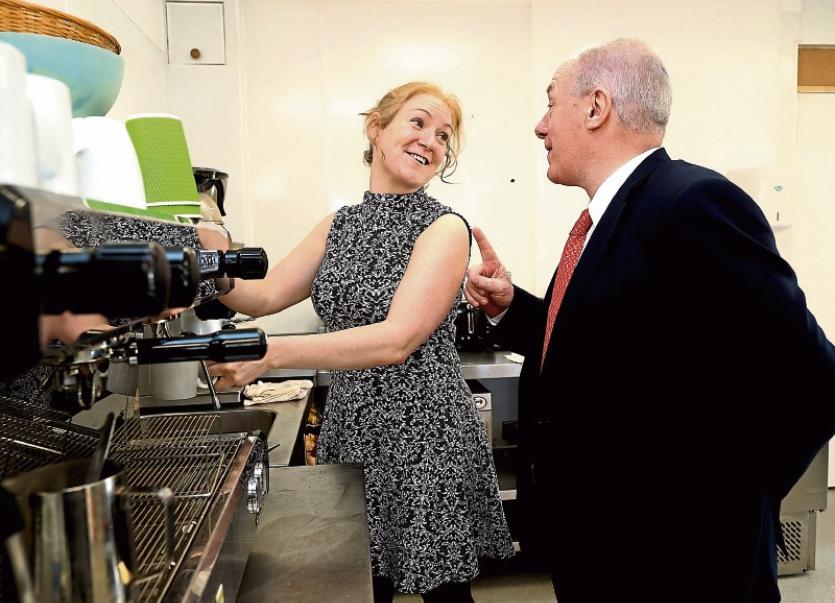 Minister Ring, right and above, speaking with Aisling Lohan who is assistant manager at a cafe in Southill, where the €190m Sicap fund was launched

DISADVANTAGED communities in Limerick will benefit from a new social inclusion investment worth €190m, recently launched by the Government on the city southside.

The Minister for Rural and Community Development, Michael Ring TD launched the five-year national investment at the Southill Area Centre on Friday afternoon.

This is part of the Department’s social inclusion and community activation programme, and is aimed at supporting the most disadvantaged communities in Irish society.

The massive nine-figure sum, which is co-funded by the European Social Fund, supports unemployed people, people living in deprived areas, those with disabilities, single-parent families, people on low income, and members of the Traveller and Roma community.

At the launch, Minister Ring said that the funding “demonstrates the Government’s commitment to to tackle poverty and social exclusion in the most disadvantaged areas.

“Working at a local level with community groups and individuals, SICAP funding supports lifelong learning, strengthens communities and helps people to become job ready. By providing practical guidance and supports the programme helps disadvantaged people throughout the country to make progress in their lives and to realise their potential.”

Sen Maria Byrne said that these Government schemes are important “as we try to make sure the benefits of our buoyant economy are felt by everyone”.

“[The programme] not only takes into account Ireland’s changing economic landscape but has an increased focus on targeting the most disadvantaged individuals and communities using community development approaches, more intense engagement, and greater collaboration with other agencies.  It is aimed at people who are less likely to use mainstream supports, providing one-to-one and group supports.”

Marie Bolger, chairperson of the Irish Local Development Network, which will implement the programme in Limerick and across the country, welcomed the “Government’s significant investment and commitment to tackle social exclusion through this programme”.

Minister Ring added that the updated programme, which previously ran from 2015 to 2017, will provide support “to those who need it most” across the country. He added that it is a “great example of local engagement”.