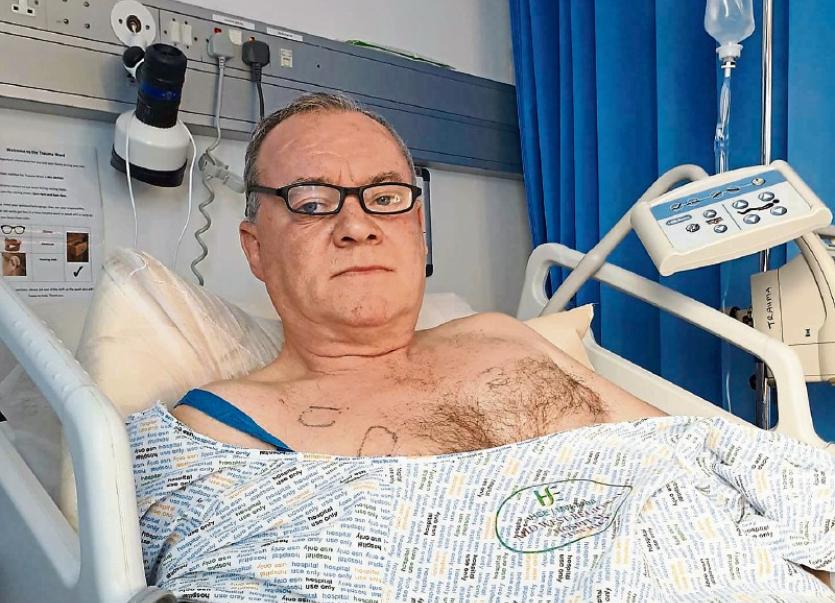 A LIMERICK man was left to survive on “a sandwich a day” for over a week while he waited for routine surgery in hospital.

Frank Flanagan, 56, from St Mary's Park, says he shed half-a-stone in weight while waiting for his operation at University Hospital Limerick. He broke his ankle while walking towards a bus stop in the city on April 10.

He was rushed to UHL, but then had to spend nine nights in a trauma ward as his surgery was cancelled each day, enduring weight loss and struggling to sleep at night.

“They fasted me every night from 12am until whenever I get told whether the operation was taking place or not. So I am missing breakfast, dinner and supper. All I am getting in here each day is a sandwich,” he said.

Speaking from his hospital bed, Frank said: “It’s only a leg operation, it’s not complicated, it would only take 30 minutes or so. I feel someone who is really sick could have had this bed.”

He finally had his operation last Thursday, but in that time, he says he has shed half-a-stone in weight.

“My other leg broke before, but that time, I was brought up to the ward, my operation was done the next day, and I was out the day after. I guess it’s a different ball game now,” Frank added.

Deputy Maurice Quinlivan criticised UHL for overseeing an “awful waste of resources”, and said it raises further questions on how inpatients are managed.

In a statement to the Limerick Leader, a spokesperson for the hospital says it "does not comment on individual cases for reasons of patient confidentiality."

They added: "University Hospital Limerick is experiencing an unprecedented number of emergency/trauma cases. This high volume which we are experiencing is uncharacteristic for time of year. Patients on emergency/trauma lists are prioritised based on clinical decision making and chronological order. At times of high demand on emergency\trauma procedures, the hospital group does seek to maximise alternative location for trauma procedures to be performed in a safe and efficient manner."

The spokesperson added the hospital at all times works to limit unnecessary fasting.

"Where patients are requested to fast and the procedure cannot take place, we would always seek to ensure the patient is advised at the earliest possible opportunity. It is unfortunate that unnecessary fasting does take place but this is to support our best efforts in maximising patient throughput on emergency/trauma lists and thus ensure best patient experience and outcomes. Where possible, patients who miss a meal will be provided with a replacement meal. This is in accordance with the UL Hospitals Group Missed Meal and Protected Mealtimes policies," they added.