‘Information is power’: Limerick dad’s fight to live with Parkinson’s 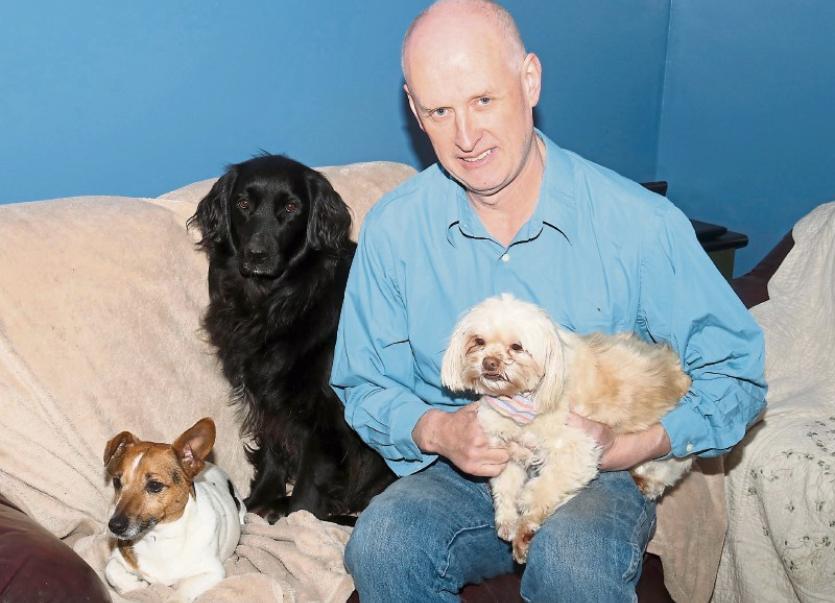 James Broderick at home with his three of his four dogs | PICTURE: Michael Cowhey

FOUR years ago, Westbury father-of-three James Broderick was making the daunting homeward journey after being let go from his beloved job in Cork.

James, who grew up in a typical, working class household in Garryowen, had a high-salaried top position in an international bank after excelling in Dublin and the United States.

But still in his 40s, the redundancy in 2014 had brought down the curtains on his professional career, and it then seemed to be the final straw following his Parkinson’s diagnosis in September 2012.

While passing through Buttevant, he pulled onto the side of the road “and balled my eyes out”. And that was when he made the crucial call to his wife Kelly.

“Kelly, look,” he said over the phone, “I let you and the boys down and I am really sorry about that.”

“That is nonsense,” she replied to her husband, still raw with emotion. “We don’t measure you by the salary or the title you have got in your job.”

“How lucky was I that my wife was so intelligent and understood the situation, while I couldn’t grasp it,” James tells the Leader.

And it was this love and understanding that helped pull James through this traumatic episode—an experience more than 100 people in the Mid-West have to go through every year.

The Limerick city native is one of 770 sufferers in the region, which is expected to reach 1,540 by 2030, the UL Hospitals Group says.

Parkinson’s disease is a progressive neurological condition, for which there is no known cure, and worsens over time.

And to create awareness on the disease and the services for people with Parkinson’s, James, now 51, has been a strong advocate as secretary of the Mid-West Parkinon’s Association.

James first saw a neurologist in 2008 when he noticed a tremor in his hand and leg. At the time, Parkinson’s had been ruled out, and instead, he was prescribed beta-blockers to calm the tremors.

But after doing a nuclear daTscan in 2011, which checks the levels of chemical dopamine in the brain, the results showed that James’ dopamine levels had depleted by 80%—a key indicator of Parkinson’s.

Though the neurologist at the Dublin Neurological Institute had informed him that the Parkinson’s “wasn’t as severe” as most cases, James’ early days of diagnosis were difficult to deal with, he admits.

“My neurologist had said that I should get an MRI, so I went into Barringtons the first day and for whatever reason I couldn’t do it due to claustrophobia or anything. I tried to do it in Galway and I couldn’t do it. And then I said to myself: ‘James, you just have to get on with it.’ I went into Barringtons again and I had the mask on for the MRI and I cried like a baby. I broke down uncontrollably. I was there for 20 minutes, just balling my eyes out. That was the day I accepted what was going on. That was the day I said to Kelly: ‘I am going to work with this now.”

At these events, dozens can share their personal stories and offer advice on everyday activities with which Parkinson’s patients may struggle. James’ advice is simple: “Information is power.”

“You don’t want to go willy-nilly on the internet. If you can find a friend who listens, or someone who has Parkinson’s, that will give you momentum. If you know someone who has Parkinson’s and they are struggling with the illness, and they are struggling with what’s going on in their lives, the best thing you can do is listen to them unconditionally.”

James lives with his wife Kelly, his three sons Liam, Conall and Danny, and his four dogs, Charlie, Snowey, Panda and Snoopy.