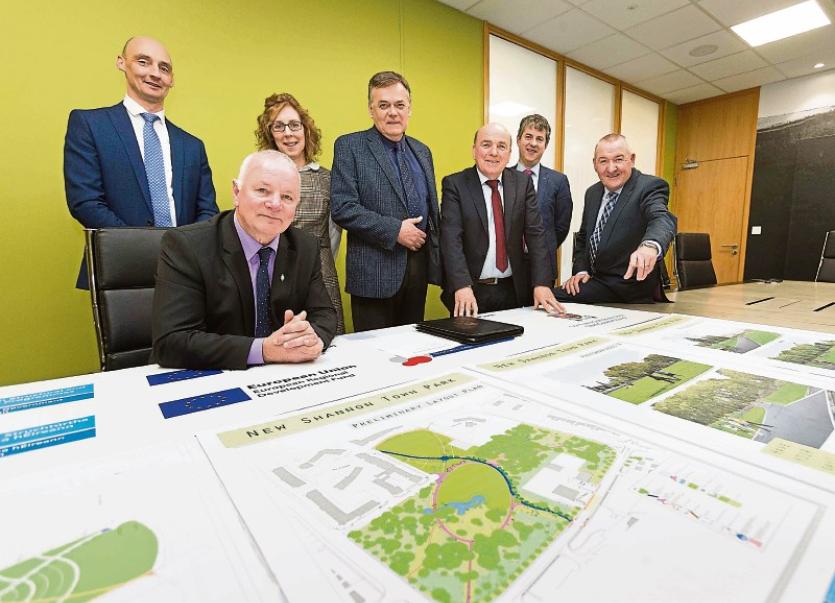 WORK to build a new park in Shannon Town is scheduled to begin in the coming week.

The proposed works include formal footpaths and a cycle track, an adventure play area and a bandstand/performance area.

Also on the cards is the first cycle pump track to be built in the Mid-West Region, formal and informal seating areas, lighting and signage, the creation of a natural water feature and new native woodland planting.

The development will include a new Toucan pedestrian/cycle crossing on Bóthar Linne.

The project – costing €910,000 – has been developed with co-funding from the Southern Regional Assembly’s operational programme.​

Former Limerick council official Pat Dowling, now, the chief executive at Clare County Council confirmed his authority is funding half the cost of the project, with the remainder coming from EU coffers.

Cllr Mike McKee, the leader of the Shannon Municipal district, said: “This is a very important and worthwhile local project that will deliver long term, positive benefits for the people of Shannon and surrounding areas. Once delivered, the Shannon Town Park will act as a focal point for the wider community, and will also enhance the recreational opportunities for children, youths and adults in the wider Shannon area.”

Following a competitive tender process, the construction contract has been awarded to the Crawford Group (County Wexford), which has extensive experience in the construction of several similar public parks.

The planned construction period is six months, giving completion of the Park towards the end of autumn 2018.