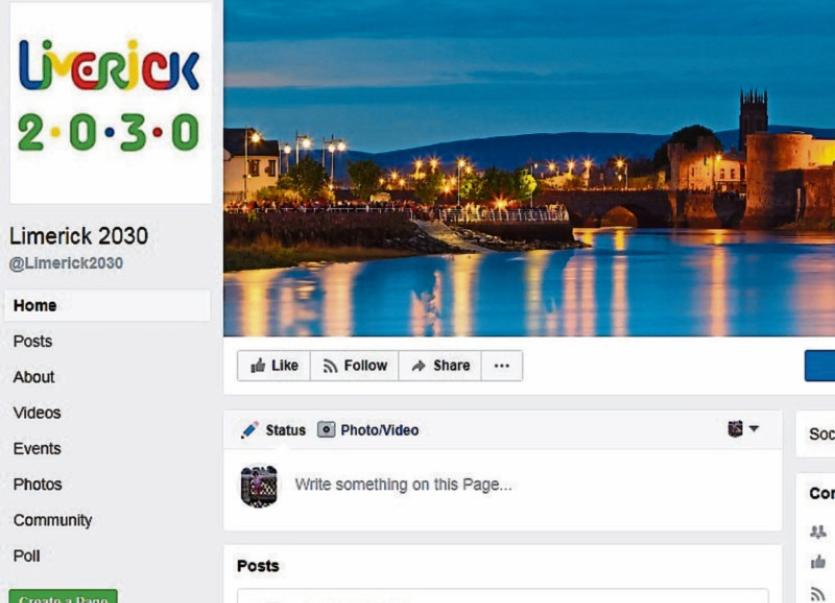 Fake news: A screen grab of the social media site

A FACEBOOK page called ‘Limerick 2030’ caused some considerable confusion among councillors this week, when it posted an unusual comment about mud-slinging.

But Limerick Twenty Thirty DAC, the company that is wholly owned by Limerick City and County Council, said that the page is not affiliated with them, and the comment is not an official one.

The unofficial Facebook page posted a link to a Limerick Leader article in which councillors called for more transparency in Limerick Twenty Thirty, with the comment: “Time to sling mud at potential ff ministers. Not good.”

Councillors were incensed at the comment, and question marks were raised over the administration of the page – which was actually set up before the inception of the Limerick 2030 plan, but just so happened to use the same name.

To make matters worse, the page in question has amassed over 2,000 followers, while the official Facebook page only has 140 followers. When searching for ‘Limerick 2030’ on Facebook, the unofficial page is the first result.

A spokesperson for the company said that the Facebook page is not associated with the Limerick Twenty Thirty company or its Limerick 2030 masterplan.

The Limerick Leader made an attempt to contact the Facebook page to find out who runs it, but there was no response.

Cllr John Gilligan, who was quoted in the original article about transparency, was enraged about the post, which he thought was the first official comment after radio silence on his complaints.

Upon discovering that the page and comments were not official, Cllr Gilligan said that his concerns still stand.

“Even though my motion was passed to see who was buying what, the council CEO (Conn Murray) said that he didn’t think that legally they had to inform us prior to buying anything. I will be looking for my own legal advice on that. I believe that as the sole owners of Limerick Twenty Thirty, and as I’m a member of Limerick City Council, that I’m entitled to that information,” he added.

“I can assume it is not as it seems to be a rather partisan and political response from a public body. Are genuine concerns to be dismissed as a slight on ‘potential FF ministers’?” he asked.

The incident is a lesson for social media users in the age of ‘fake news’ dupes. Facebook founder Mark Zuckerberg is currently in the midst of a storm over a major breach of data, which is alleged to have been used to meddle in the US elections.