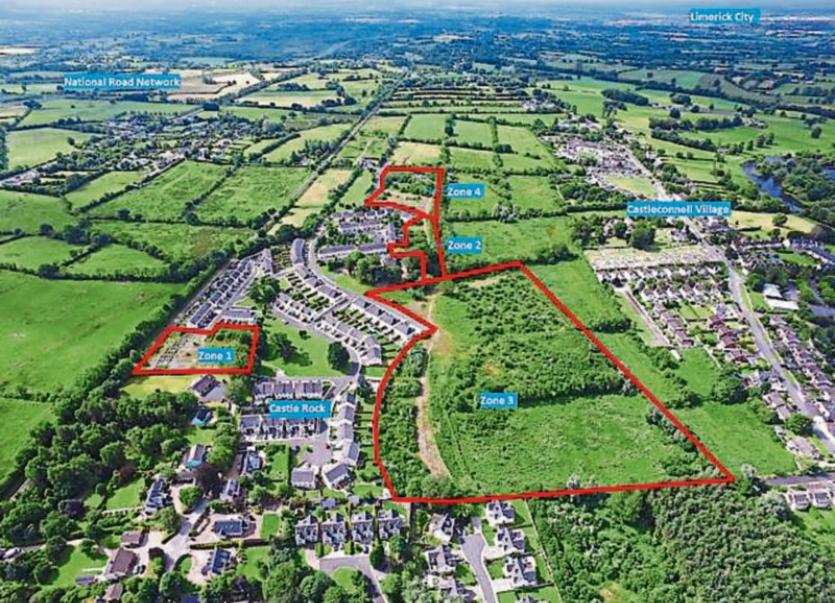 Snapped up: The four zones of land in Castlerock, Castleconnell

THE POPULATION of Castleconnell is set to rise in the next year with confirmation that almost 19 acres of development land at Castlerock has been snapped up.

Michael O’Connor, director of REA O’Connor Murphy, confirmed to the Limerick Leader that the sale was closed in recent weeks.

While he remained tight-lipped about the price and purchaser he did say there was “good interest” with four bidders in the process.

“There is a big housing scheme being prepared at the moment to be lodged to planning. We would hope that the housing scheme would be on the market by early next year,” said Mr O’Connor.

“Castleconnell is a very popular area. At the moment if you were launching a three bed semi-detached scheme it would meet the first time buyers market. There would be detached houses for those trading up as well,” he continued.

“This development is very positive for Castleconnell,” said Mr O’Connor, who confirmed REA O’Connor Murphy will be handling the sale of the houses when the time comes.

The Castlerock development originally comprised just over 32 acres in total and had planning for 248 units, 147 of which are sold and occupied today. The built part of the estate is taken in charge by Limerick City and County Council. It is situated on the southern side of Castleconnell village on the Bellmont road between School Road and the Old Dublin Road.

It is within walking distance of the village.

What was for sale was the remainder of the site – close to 19 acres in four zones.

All planning permissions on these lands have expired.

Zone 1 is 1.29 acres with former planning permission for 21 units of which 15 are constructed to floor level. It is currently zoned as residential development area – phase 1.

Zone 2 is 1.37 acres with 13 units constructed to floor level. This too is currently zoned as residential development area – phase 1.

Zone 3 is the largest with 11.89 acres. It previously had planning for 68 units. It is currently zoned as a mix of residential development area – phase 1, education and community facilities and open space and recreation.

Zone 4 is 4.16 acres of potential land to left of entrance road, currently zoned as open space and recreation.

Auctioneers report that houses that come on the market in Castleconnell - either for sale or rent - are quickly snapped up.

As well as being a picturesque village along the Shannon it is only 11kms from the city and has excellent access to UL, National Technology Park and M7.

Two of its most famous residents are CJ and Jean-Marié Stander who settled there last year.

“We were looking to buy a house to make our own for quite some time. We had friends living in Castleconnell, and loved the area, so we were looking at property in and around Castleconnell. Finally after two years of searching we found a house we could see ourselves living in, and the rest is history,” said Jean-Marié last year.

“I absolutely love the scenic walks. I love walking to the fairy woods, through the village to the local shops and all the way to the World’s End and back especially on the odd sunny day!” she said.