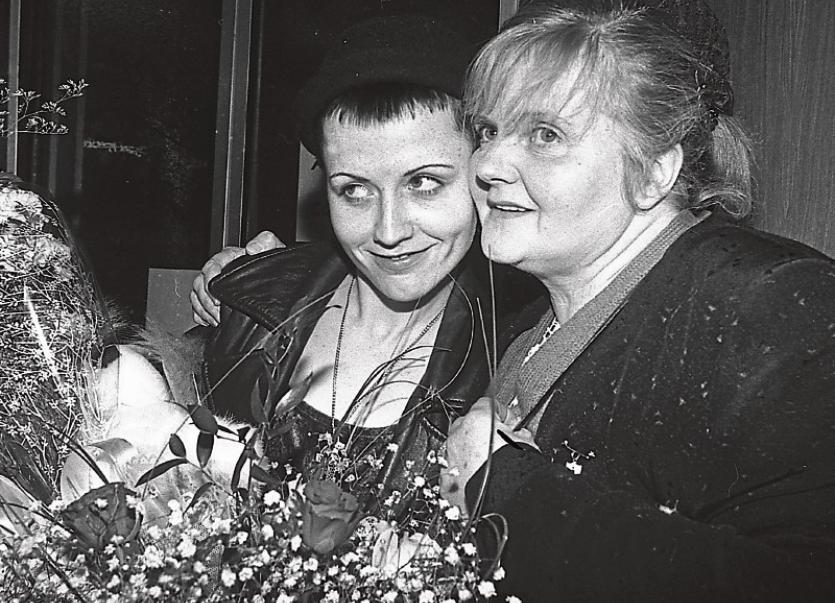 Thousands of messages of sympathy were penned in memory of The Cranberries front woman Dolores O'Riordan, pictured with mum Eileen in 1994 Picture: Limerick Leader

A BOOK of condolence containing messages of sympathy from thousands of people from Limerick and around the world is to be presented to the family of the late Dolores O'Riordan this Wednesday.

The book was opened to the public at Limerick City and County Council's corporate headquarters at Merchant's Quay in the city on the morning of Tuesday, January 16 - a day after the sudden death of the iconic rock star in London. An online book of condolence was also opened at limerick.ie.

“The tributes have been a great help - you can actually feel it,” Dolores’ mother Eileen told The Leader.

The Ballybricken woman said that people from all over the world continue to visit the grave of the singer to pay their respects.

“Even last Sunday at Mass, three Americans came from New Hampshire and brought rocks from the river. A girl from a fan club came from Denmark. There is another girl coming for Easter,” Eileen continued.

“They go to the church. Last Sunday, before one o’clock there were about six or seven visitors to the grave. It is really nice. You think it wouldn’t help but it does help.”

Eileen, who is sacristan in the local church, meets many of the fans and has a chat with them about their memories of The Cranberries front woman.

“I meet them in the church. I’m still getting the letters and cards - I got five yesterday. I can’t believe it - a lot of them have a card for myself as well as my family.”

All the cards and letters, Eileen says, will be read in time.

“And any of them with addresses that were sent, in time, I will answer those too,” she said.

Thousands of mourners lined O’Connell Avenue for the public reposal of Dolores in St Joseph’s Church on Sunday, January 21.

“I went to Glenstal on Sunday with a friend of mine and he said to me that it wasn’t really like a death or funeral- it was like an awakening,” said Eileen.

“The people came out in all that rain - can you imagine it. It meant so much,” she added.

Over the past two decades Eileen has been a regular visitor to Canada to see her grandchildren  Taylor, 20, Molly, 17, and 12-year-old Dakota.

“The children are getting on good. They are selling up the house - too many memories. When they move I will go back to Canada to see them for a bit.”

Dolores O’Riordan was found dead in the bathroom of her room in the Hilton hotel in London just hours after she called a pal sounding “full of life”.

An inquest into the singer’s death is due to take place next month.