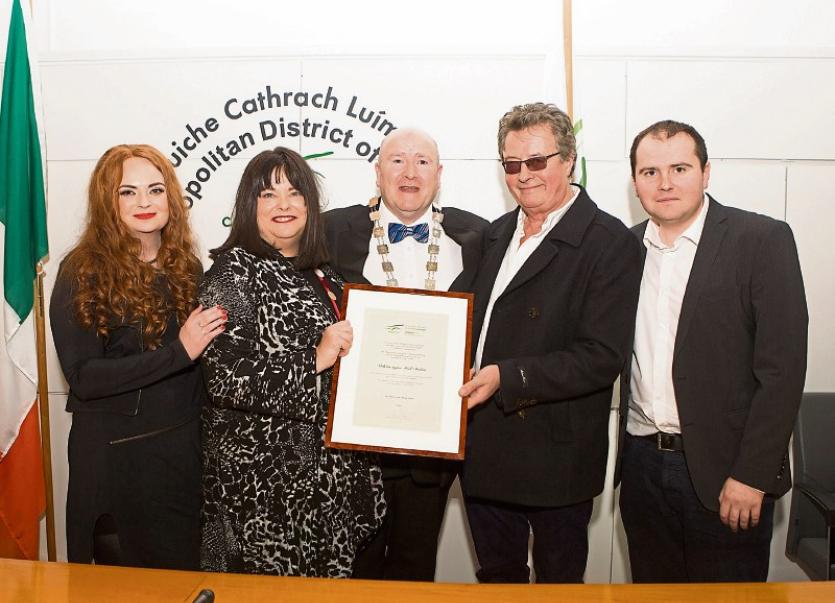 IT was standing room only at City Hall as Mick and Valerie Dolan, who run the popular music venue at the Dock Road, received one of Limerick’s highest honours.

Metropolitan mayor Sean Lynch gave the pair, who have run the facility for 23 years, a special reception to mark their achievements in not only bringing live music to Limerick, but also promoting up-and-coming artists.

He added Dolan’s pub has helped put Limerick on the map.

“No matter where you go, read any literature on Ireland, under headings like ‘a must visit’, ‘entertainment’, ‘live music’, ‘atmosphere’ and ‘food’, Dolan’s is there. It’s home to all types of live music in the heart of our city,” Cllr Lynch said.

Addressing the audience gathered, Valerie said: “It's great to have a successful business. But it's even better to have friends, and I'm so glad each and every one of you are here today. You're among our favourite people and we really appreciate it.  Thanks to all the staff at Dolans. If it wasn't for what you do, we wouldn't be able to do what we do. We do what we do, because they do what we do.”

Mick added there is still a lot more years to come from Dolan’s – with their quarter-century commemorations on the horizon.

“Dolan’s will be around for a long time to come. We have plenty of other ideas, we have other plans. We will turn 25 in two years time, and it's going to be exceptional. We have a lot of big events coming up for this,” he said, “This is a wonderful honour for us. For all you who made the effort to come here tonight, from the bottom of my heart, thank you.”

A number of councillors present also paid tribute to Mick and Valerie, as did Sheila Deegan, the council’s arts officer.

She said: “Mick and Valerie have put Limerick front and centre as a music city and not just on the Dock Road, but also in parks and castles. They have been working as agents of change in Limerick for 23 years.”

Fellow publican, Cllr James Collins added: “It’s important to recognise good people – we often are so busy we forget about this.”

The reception was coupled with musical interludes from guitarist Brian Finn and piano player David Indo.

Then it was all back to Dolan’s on the Dock Road where the party continued!