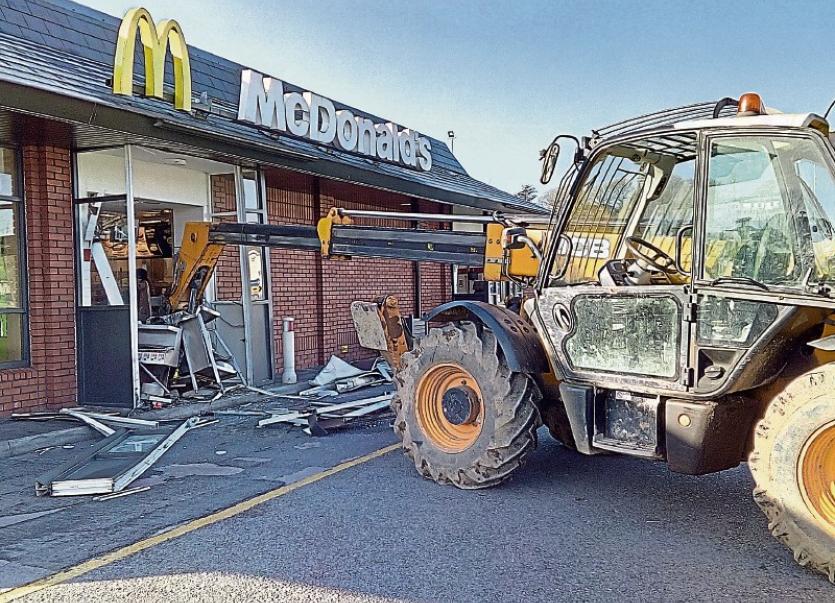 The JCB was used in a reported attempt to emove the safe from McDonald’s restaurant in Castletroy Picture: Press 22

ARRESTS have yet to be made as investigations continue into an attempted burglary at a McDonald’s in Limerick in which a JCB was used in an attempt to gain entry to the fast-food restaurant.

The incident happened at approximately 2.50am on Tuesday at the McDonald’s at the Castletroy Shopping Centre on the Dublin Road.

It is understood that gardai are currently reviewing CCTV footage from the night in question and investigations into the incident are ongoing.

The JCB teleporter was used to break down the side entrance to the premises in an effort to access the restaurant’s safe.

Nothing was stolen during the incident, however, the building was quite badly damaged.

“I just can’t believe something like that would happen in our area,” Cllr Pond said.

“To be so brazen as to take a digger and drive it through a window. With CCTV up everywhere, you’d think these people would have a little bit of cop on.”

“You wouldn’t think it would happen in (the) Monaleen, Annacotty, Castletroy area but look, it looks like now it can happen anywhere.”

“Hopefully McDonald’s will open again, they have locals working there. I’d hate to see anyone being kept out of employment. They do a great service there as well.”

The incident is the latest in a series of attempted break-ins at the Castletroy Shopping Centre in recent months.

In January, popular cafe Hook and Ladder was targeted by thieves in a ‘smash-and-grab’ in which a tip jar was stolen. On New Year’s Eve, another restaurant was also targeted.

There has been a few issues in the area at times, Cllr Pond added, but he noted that "garda cooperation is very good".