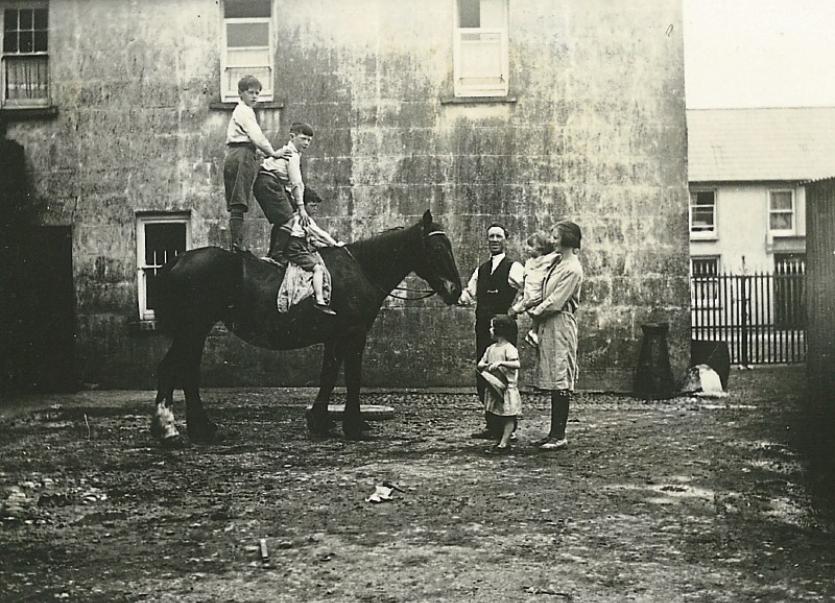 John McCarthy and family at the back of the circus bar in Cappamore. Many more rare photographs like this will be on display this weekend

TONY McCarthy arrived into the world on February 5, 1966 – the same day his grandfather, John, passed away.

One circus enthusiast died that day, another was born. Tony will honour his Cappamore grandfather’s legacy this weekend with John McCarthy’s Circus Bar exhibition.

“It will be a bar with no beer,” smiles Tony, who is the curator. It will showcase the wonderful and unique collection of Limerick related circus memorabilia, assembled by four generations of the McCarthy family since 1895. It is part of the Circus 250 commemorations and will be officially launched on Friday, March 16 at 6pm in the Limerick Museum. It will be opening specially on Saturday and Sunday, March 17 and 18 from 2pm to 5pm.

The story begins in the 1800s. Born in 1885, John McCarthy grew up in his father, William’s Cappamore pub.

“John would have travelled miles with the other kids to meet the horse drawn wagons arriving into the village. His father, William, would have let the circus people stay at the back of the pub. That was the circus field. As a child John and his brothers had the wonderful experience of having the circus in their back garden. When they would wake up the circus would be there,” said Tony.

When John was just 10 he started collecting circus photographs and posters.

“That was his interest – it was a great spectacle in a country village when the circus came to town. In later years, at the top of the village, his father set him up in business with another pub that became known as McCarthy’s Circus Bar. All those wonderful photos and posters were on display in the bar. It was well known among the show people. They would give him photographs and posters.

“At the back of the pub he had these sheds. The circus people would have stored all their equipment there – Fosset’s might leave seating, Duffy’s might leave tents and canvas and collect it later on,” said Tony.

While John McCarthy didn’t know it, he was  actually archiving circus culture and arts for future generations.

John passed his love of the “big top” and all that goes with it onto his sons. Upto 20 circuses travelled around Ireland and when they arrived in your home town or village it was one of the highlights of the year.

“Our earliest photographs go back to 1895 but in the 1940s they brought it to another level completely. His son Michael took wonderful photos of the circus parade and the circus arriving into Cappamore. There are ones with John McCarthy back at the circus bar with his own kids standing on the horse doing tricks.

“In those days the Angelus bells would have rung at noon. Farmers would have downed tools, come into the village and the circus parade would commence with a band leading the artists out in McCarthy’s field and march up through the village.

“It was some spectacle. They would turn around and go back down again through the village.

“This was in the 1940s and 1950s and now roll onto the year 2018 and as part of the Circus 250 celebrations in Limerick city at noon on St Patrick’s Day we will have the crowds on the street watching the grand marshall Marion Fossett leading circus artists and jugglers. And near enough to the parade we will have McCarthy’s Circus Bar in the Limerick Museum opening up again,” said Tony, who also fell in love with the circus from a young age.

Growing up near the Fairgreen in the city he saw Fossett’s circus coming to town and listening to Teddy Fosset and his father talking about the circus in the old days. He took possession of his grandfather’s memorabilia and is now displaying it to one and all.