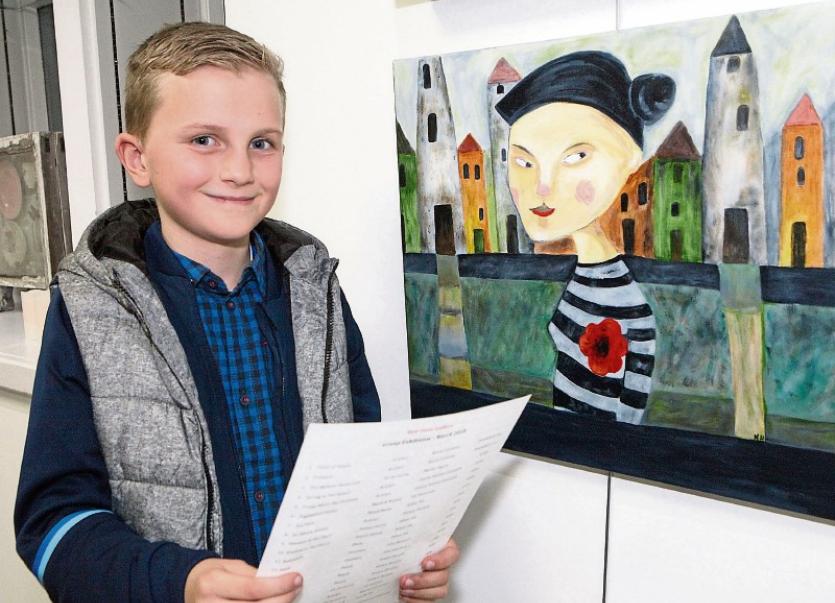 Adam Sheehy, smiling for the Nationwide camera at the Red Door

NEW flag-poles, new spring planting and a serious bout of power-washing foreshadowed the arrival of the RTE Nationwide team in Newcastle West earlier this week.

And the emphasis throughout the two days of filming was on demonstrating the best that the town has to offer to its residents, and to visitors. The theme was very much, Newcastle West, past, present and future, according to Michael Finucane, chairman of the Newcastle West Development Association.

Sporting organisations all showed their mettle in action, local landmarks were visited and local community leaders were interviewed about the town’s economic and social life and in particular about their hopes for the five-year plan for the town.

On Monday evening, however, it was the turn of the artistic community with filming of a group exhibition of local artists at the Red Door Gallery with music played by the Capriccio String Quartet.

The town is very fortunate in having so many writers, musicians and artists, Vicki Nash, chairperson of the Newcastle West Arts Committee said as she welcomed Nationwide and members of the public to the exhibition. It was an opinion shared by Míchéal Rowsome who spoke on behalf of the community of artists and who invited his listeners to focus on the good  news of the town.

“And what does shine through is how people follow their passion and do creative things, wonderful things.”

The exhibition can be viewed each Thursday, Friday and Saturday from 12.30pm to 4.30pm until the end of the month.

Mary Kennedy, the Nationwide presenter will return to Newcastle West next week and the programme is scheduled to be broadcast on Wednesday, March 28.