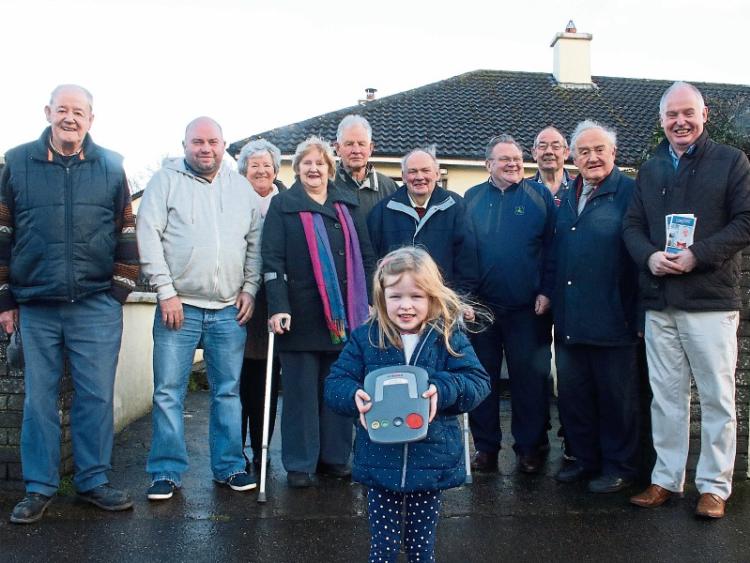 Young Ava Horan with the base unit of a personal alarm system in front of her grandmother Maureen Heuston and others in the community Picture: Michael Cowhey

THE CHAIRMAN of a County Limerick Community Alert says rural dwellers are worried on the double.

They are in fear of their lives of being robbed in their home and having their house broken into while they are out, said head of Oola Community Alert, Joe Meagher.

“There is an unprecedented demand for personal alarms since the murders in Limerick city. There is a big surge. I have a waiting list of people,” he said.

Men and women over the age of 65 can apply under the Seniors Alert Scheme. A local group like Community Alert applies to Pobal – government supporting communities – for a person. Once the application has been approved the Community Alert contacts the designated suppliers to arrange installation.

One of those suppliers is Peter Butler, of Task Community Care. He agrees that there has been an increase in demand.

“In the winter months people are afraid of crime or they might fall,” said Mr Butler.

He says successful applicants receive a base unit attached to a landline phone or a sim card can be used. The alarm itself can be worn as a pendant around the neck or like a watch around your wrist. When the alarm is pressed it connects wirelessly to the base unit and a call is put in to a 24 hour monitoring centre.

Mr Butler gives a number of examples. He says if an elderly person hears somebody trying to break-in to their house they press the button, go through to the call centre and ask for garda assistance. The call centre employee knows immediately which house it is and despatches gardai.

Another example Mr Butler gives is if someone falls in the yard and presses their alarm. As they are too far away from the base unit they can’t speak in to it. The alarm will go through to the call centre. The staff member will try and talk to the person through the base unit and if there is no response ring the house phone number. If that goes unanswered they will ring a number of keyholders to tell them something is wrong and go to the house.

“It gives great peace of mind to the person and their families,” said Mr Butler. The grant system has also changed to make it easier for applicants. Successful candidates get the installation and first year monitoring service for free at a combined cost of over €300. In the second year they must pay the cost of the call centre monitoring service at around €66.

Mr Meagher says the alarm isn’t the perfect solution as there is no substitute for gardai.

“At least this is something to satisfy people. The garda station in Oola was closed but it was all done up in the last few years and it is being maintained. We are the first station on the way into Limerick from Tipperary and it should be opened again but we are very lucky to have excellent gardai in east Limerick under Sergeant Helen Holden in Cappamore,” said Mr Meagher.

“We started it last year and the feedback is very positive.  It is great security and great peace of mind that somebody is on hand if they fall, or if somebody comes into their house that help is quickly at hand. It’s great value,” said Mr Cummins.  For more information contact your local Community Alert or Peter Butler, of Task, on 086 0568155.