Carried by her devastated family, the remains of Dolores O'Riordan arrive at St Joseph's Church this Sunday PICTURE: LIAM BURKE/PRESS22

LAID out in an open casket with the motif of Our Lady at the Foot of the Cross carved into the oak at either end, a set of pearl rosary beads are threaded through the fingers of iconic rock star Dolores O’Riordan as she lies in repose at St Joseph’s Church in Limerick city this Sunday.

The body of the 46-year-old mother-of-three arrived in a hearse at the church on O’Connell Avenue at 12.10 under grey clouds.

The city is in mourning but the Limerick woman, who brought international attention to her home place thanks to her musical talents, is at peace.

“It’s very sad. The coffin is open - I’m not sure if people were expecting that and she looks so tiny - very peaceful, at rest,” comments Sheila Deegan, ‎Arts and Culture Officer, ‎Limerick City and County Council, on the steps of the church.

Hundreds of mourners from the city and county, all around Ireland and indeed from as far away as China, Spain and Costa Rica take baby steps up along the far left aisle of the Roman Catholic church where Dolores made her First Holy Communion and Confirmation.

The first photo they lay their eyes on, after signing the book of condolence, is a photo of Dolores meeting Pope John Paul II in 2001. Discreet posters at the church doors request that people refrain from taking photos inside the church, on their phones. 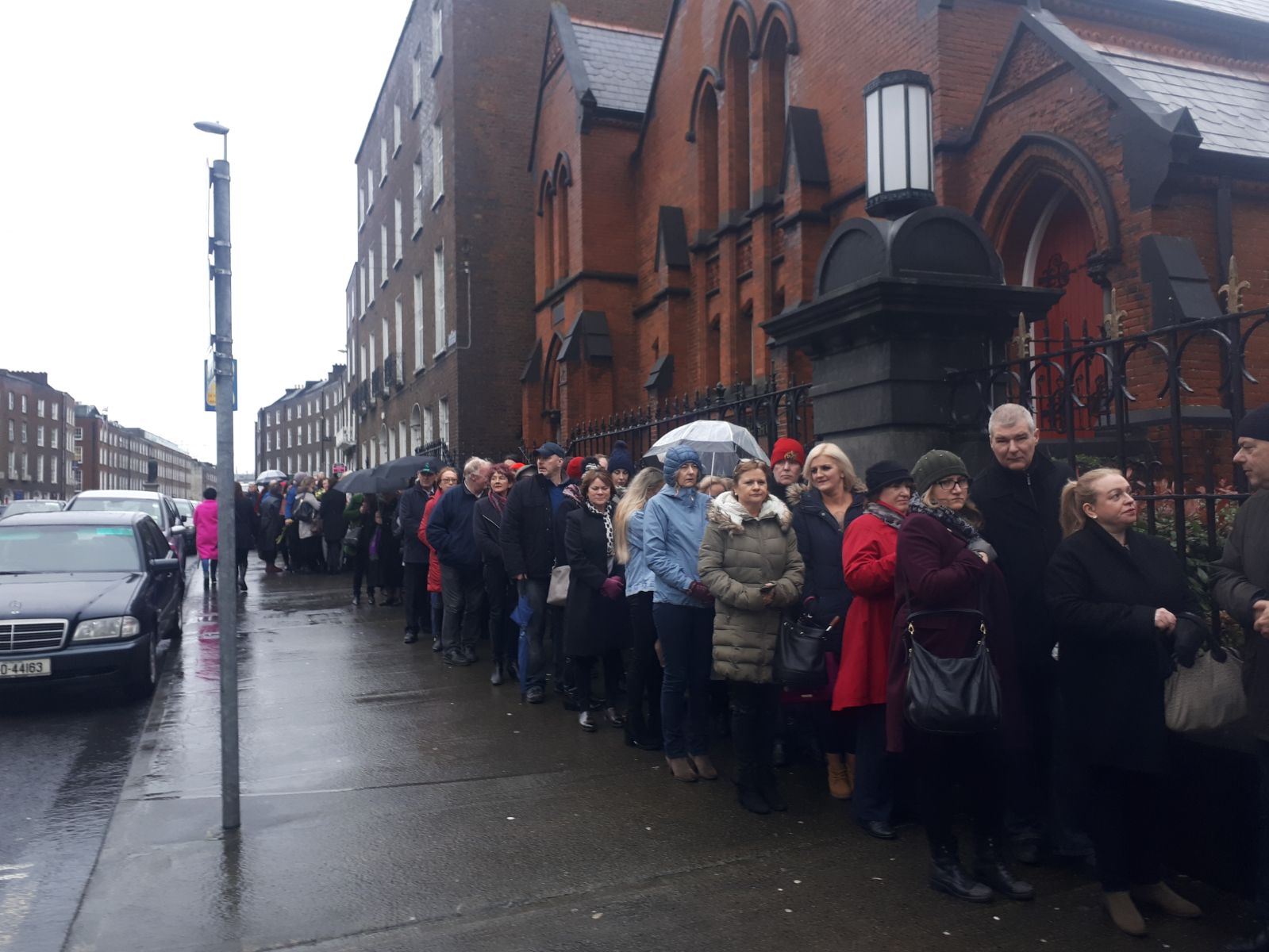 Undertakers from Cross’s Funeral Home stand vigil around red ropes which keep mourners a respectful distance from the remains of the global superstar who hailed from the small townland of Ballybricken.

Even death can’t dim the superstar quality of Dolores. A black glittery top peeps out from behind the frills of the casket’s shroud. Dark eyeshadow matches her raven hair. In front of the altar mourners bow their heads. Some say a prayer, some beat their breast, many a tear is shed.

In front of the casket stands a solitary bouquet. Yellow and red flowers.

“The song has ended but the memory lingers on,” the tribute from her Cranberries bandmates Noel, Mike and Fergal, reads.

The song that set her on the road to superstardom, Linger, plays out softly over two large speakers to the right of the altar.

Outside on the street the queue has increased 10-fold. Many Munster supporters make their way to pay their respects following the three-hour postponement of their side’s crunch European Champions Cup pool game with Castres Olympique. Heavy rainfall caused the delay.

The clouds have stayed open over Kilmallock, Ballybricken and Limerick city all morning and continue to do so into the afternoon.

After today’s public reposal, Dolores’ body will be taken to Cross’s Funeral Home, Ballyneety, near her Ballybricken home, where she will lie in repose on Monday from 4pm to 8pm.

Her funeral Mass will take place at 11.30am on Tuesday in St Ailbe’s Church, Ballybricken, followed by a private burial in Caherelly cemetery. She will be buried next to her father Terence, who died in 2011.

Musician Emma Langford from Caherdavin arrives to pay her respects. With her is her mother Ina.

“I would have loved to have met her,” the young singer laments.

“I never got the chance. It would have been wonderful to have had a chat with her and heard about some of her experiences but she left a real legacy. Over the last few days I’ve had The Cranberries music on repeat and for the band, her family and the fans, the music will always be there - that beautiful reminder of what she did.”

Oonagh Kirby from Corbally emerges from the church with her great friend Carmel Savage from Parteen.

“First and foremost I am thinking, like all of us, of her mother Eileen and also of her children,” comments Oonagh.

“I remember she made a statement in recent years that she was 'The Queen of Limerick' and I thought it was a beautiful thing to say and that’s how the people of Limerick feel about her. She took on the world,” she added.

Carmel felt compelled to pay her respects to the singer who brought a touch of home to her life while in Australia.

“Twenty years ago I lived in Australia and all of the Australians loved Dolores and when they recognised my accent they would talk about Dolores O’Riordan. I’ve always loved her music - Linger and Zombie I suppose would be my favourites but I loved all of them really.”

For Oonagh, there is solace knowing the superstar is now at rest.

“A star fell from the sky the day we got Dolores and now that star is going to go back. Codladh Sámh (sleep tight) Dolores O’Riordan.”