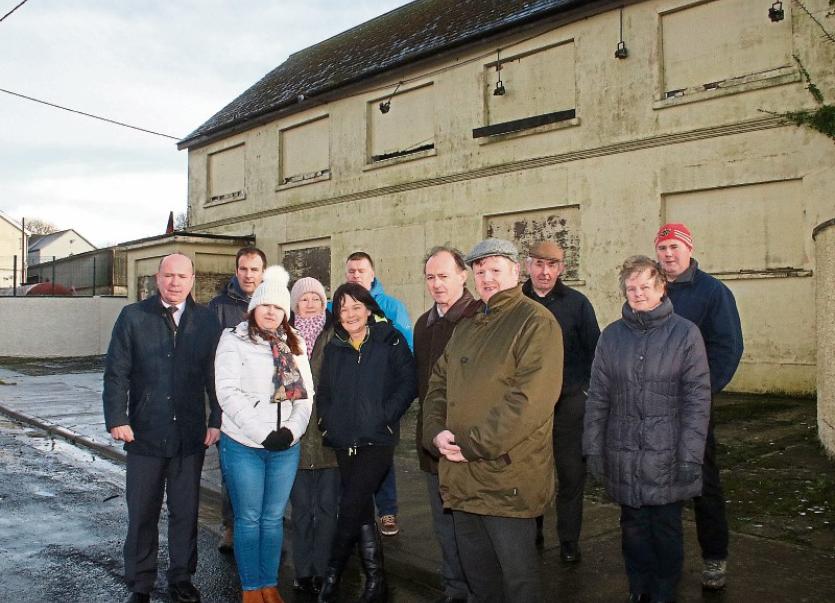 THE OLD store in Herbertstown is a “blight” on one of the nicest villages in the county, if not the country, said Cllr Bill O’Donnell.

On a biting cold and wet Tuesday morning this week, over 10 locals demonstrated the strength of feeling locally by showing up for the Leader photographer.

Cllr O’Donnell raised the derelict building at a Cappamore-Killmallock municipal district meeting, describing it as a “toxic issue”.

He said the old store was, once upon a time, a bustling grocery and filling station.

“It was certainly unoccupied and in a state of dereliction in 2009. It was one of the first issues that I took up as a councillor. It is a blight on one of the nicest villages in the county, if not the country. It is a lovely picturesque village and well kept by the local community groups,” said Cllr O’Donnell.

He described it as an “old chestnut” of his that has turned into a “toxic issue in a small rural community”.

“I am tired of it and I am sick of it. We have to do something about this,” said Mr O’Donnell, in the meeting.

The old store has a chequered history. After it was taken over by the bank he said it was sold off to a company that was later struck off, then reinstated and struck off again.

“There was a planning enforcement prosecution by the Council in 2011. The company paid a fine. When it was reinstated there was some hope they might deal with this particular issue but unfortunately, no. It is owned by a company that is defunct,” said Cllr O’Donnell.

He is calling for Limerick City and County Council to purchase the building.

“Between the increase in local property tax and in rates the Council now has considerable finances at their disposal. It is time we started putting money into projects like this.

“There is one thing that can be done to resolve this and that is to purchase it under a compulsory purchase order (CPO). The Council just have to bite the bullet as it is not going away. We can make something of it. It is a blight,” said Cllr O’Donnell.

“It is a disgrace to have such a building in such a state of disrepair. We need action,” said Cllr Mitchell.

Cllr Brigid Teefy said it is getting more and more derelict.

“We need to take action on it. It is an eyesore,” said Cllr Teefy.

Cllr Mike Donegan said Cllr O’Donnell has been raising this issue since 2009 and it is about time something is done.

”The Council successfully prosecuted its owners in 2011 for non-compliance with a Section 11 Notice under the Derelict Sites Act, 1990. The Council considered acquisition of the site at this time but did not have budgetary provision. The Kilmallock area office carried out some remedial works to the site in March 2012. The site is currently being revalued as per the provisions of the act and will be charging a 3% levy on the lands from January 2018,” reads the reply.

Sean Coughlan, acting director of support services, said the new Urban and Village Renewal Department would be working with owners to renovate their premises.

“We will look at all of the options,” said Mr Coughlan.