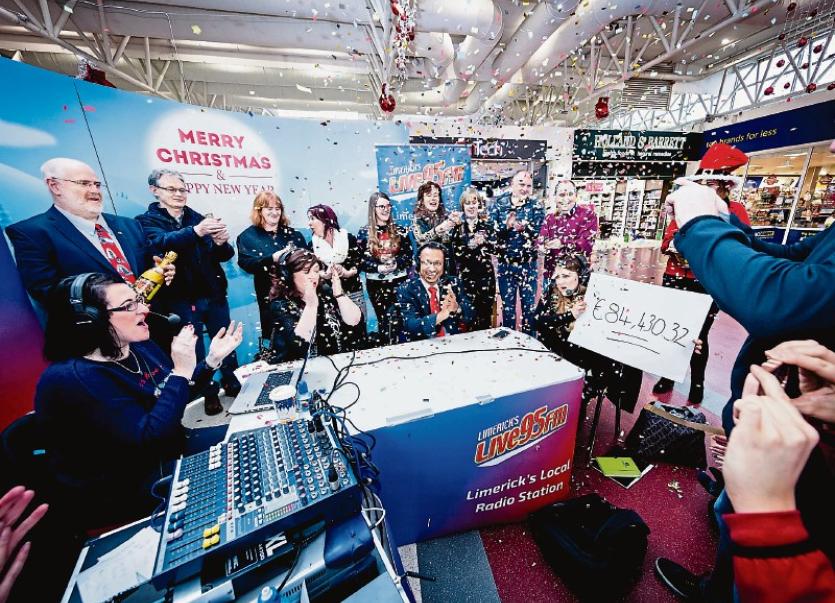 Confetti released during Live 95FM’s broadcast in the Parkway Shopping Centre when the figure of €84,430.32 raised by this year’s 95 Stop Tour was announced Picture: Keith Wiseman

LIMERICK’S Live 95FM listeners have contributed more than €84,400 for ill and vulnerable children in Limerick as part of this year’s Live 95FM’s 95 Stop Tour.

This money will now be donated to the Children's Ark, including the Neonatal Unit at the University Maternity Hospital, and CARI Limerick, bringing the total amount raised by 95fm listeners for the chosen charities to €600,000.

“I am overwhelmed by the support we received and cannot thank enough each and every person who contributed to the success of this year's 95 Stop Tour',” said Nichola Quinn, Limerick’s Live 95FM’s 95 Stop Tour co-ordinator.

“I am so happy with the amount that was announced today and knowing that it all goes to ill and vulnerable children in Limerick is an incredible achievement for everyone at Limerick’s Live95FM and for everyone in Limerick who contributed.”

Presenters and Live 95fm shadows visited communities and organisations around the county who helped to raise money through a variety of initiative including coffee mornings, bingo nights, welly wednesdays, fun cycles, walks, pyjama parties, raffles, living in a window, and family fun days.

Broadcasting live from three locations during the week of the initiative, the tour included aftertoon tea at the Strand which raised more than €12,000 in one afternoon.