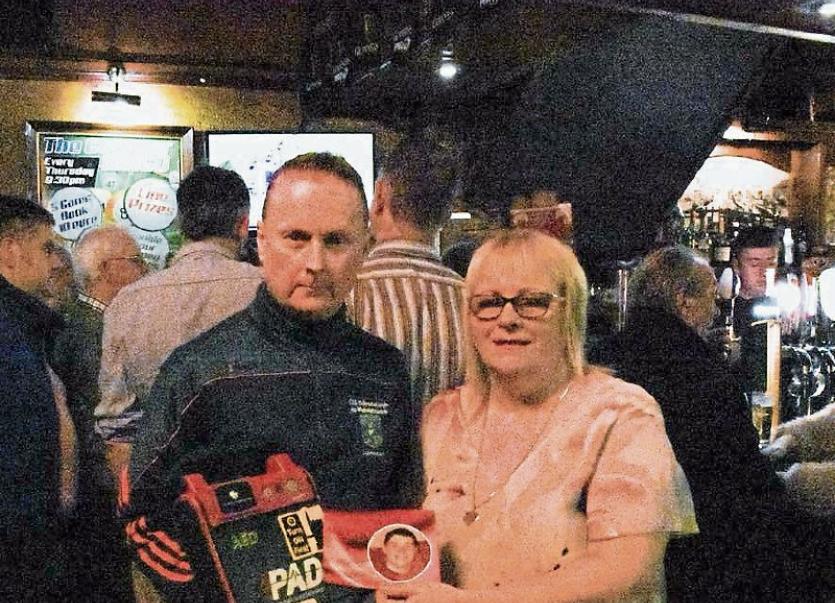 AN inspirational woman from Limerick city has given away her 11th defibrillator to Corbally GAA club.

Ann Boland, St Mary’s Park, has raised thousands of euro to ensure community groups across the city have the device, which provides support to people who have suffered a heart attack before an ambulance arrives.

Ann tragically lost her only son David to an asthma attack 11 years ago when he was only 14.

The latest defibrillator was donated to Abbey Sarsfields GAA club, with the device set to be placed in one of the schools in the area, chairman Christy McInerney said.

The move is fitting given Ann’s son played with the club until his untimely death– and it’s the first defibrillator in the Corbally area.

Ann has donated defibrillators to schools, sports clubs and youth centres over the years.

But this year she decided it was important to donate to a local club which has done a lot of work for the local youth.

She said:  “Donating defibrillators is a great way to remember my son every year, and highlights the importance and need to have defibrillators in local communities, I was delighted this year to donate a defibrillator to our local GAA club".

Mr McInerney, who is also a community activist and a former Fianna Fail local election candidate, said training will be taking place across the community in how to use it.

“It’s vital to have a defibrillator in the area. We are hoping to put it in a school in the locality so it’s there to access for children in the locality. That’s our plan of action at the moment,” he said.

Mr McInerney said with a recent upsurge in cases of Sudden Adult Death Syndrome, the defibrillator will be carried at all his club’s matches.​

“To have it in the area is a key thing, as there is no defibrillator in the Corbally area at the moment. That’s why we intend to run a course in the next couple of months to get people trained up on the use of defibrillator. So it won’t just be for the club, it will be for the greater public,” he said.

Separately, members of the O’Connell Avenue community sent their own defibrillator off to an engineer over the weekend to see if it can be saved.

It comes after vandals smashed the front of their life-saving device.

As a result of this, major damage was been done to the defibrillator.

On average, a defibrillator, which provides immediate life support, can cost up to €2,000.