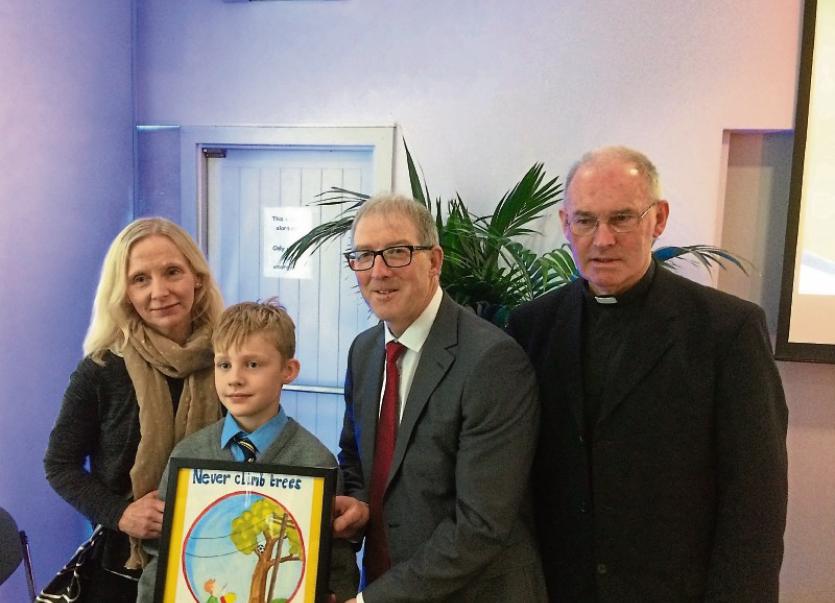 A LIMERICK boy definitely didn’t draw the short straw when he was named the overall national winner of an ESB art competition.

The 12-year-old sparked a unanimous decision amongst the judges, who picked his painting as the best. Emmet portrayed two boys looking up at a ball in a tree beside power lines. The message he added was “Never climb trees near overhead wires”.

The core objective of the Stay Safe, Stay Clear programme is to educate primary school children about how to stay safe when they are playing outdoors near electricity poles and overhead wires, said an ESB spokesperson. And Emmett – son of Kevin and Helen – hit the nail on the head with his artistic talent.

“It provides a fun, exciting and educational way for pupils from junior infants to sixth class to discover the benefits of electricity, while learning to be safe around it through lesson plans designed around curriculum strand units and learning objectives,” said the ESB spokesperson.

Emmett was the toast of Doon CBS Primary School, whose teacher is principal, Joanne O’Connell, as he won €1,000 for the school. The pupil received a €100 voucher and a bag of goodies for his talent.

The ceremony was held in ESB Networks, Leopardstown and included a presentation by ESB Networks public safety manager, Arthur Byrne, as well as a workshop and entertainment. Emmett was joined by proud mum Helen and Br James L Dormer, Doon CBS Primary School board of management and former principal. The event celebrated the winners and showcased their posters which feature in a calendar.

Emmett is well used to these occasions as he has also won Tipperary Credit Union’s annual art competition. He now goes forward to the national stages.

The theme was let your imagination run free and Emmett did. He drew himself in school day dreaming, his mind wandering to farming, hurling and superheroes.

The boy from Liscaugh is wished all the best in the Credit Union competition by Ms O’Connell, all the staff and pupils in Doon CBS Primary School and all the pupils.