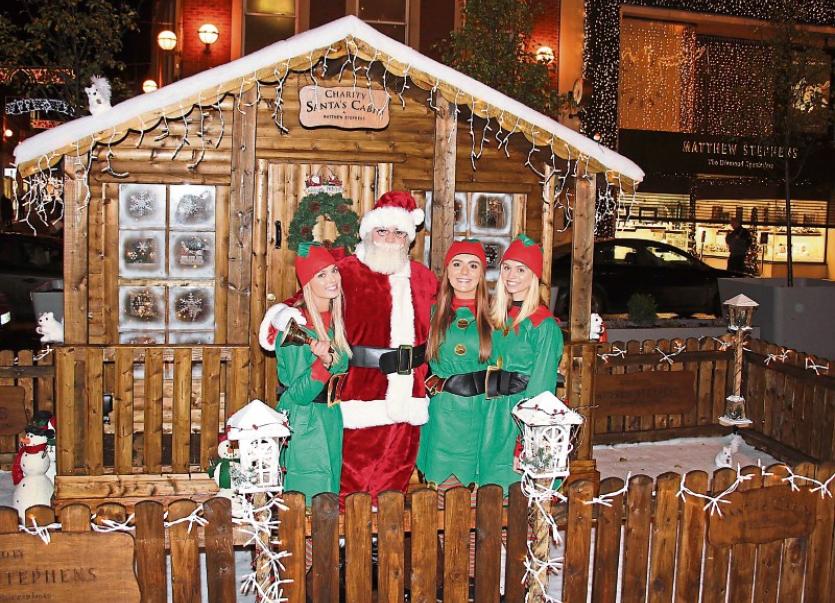 Elves Saoirse Hammond, Emma O’Reilly and Isobel Cox with Santa outside the Cabin for Barnados

LIMERICK jeweller Matthew Stephens is bringing some festive charity sparkle to the heart of Limerick city that comes all the way from the North Pole.

The Limerick-owned jeweller has opened a Santa's Cabin in aid Barnardos.

The Cabin has opened on O'Connell Street in the Urban Garden just in time for Christmas, with the help of the jeweller, which operates across three floors on the city's main thoroughfare.

The aim is to raise money for Barnados' Homemaker Fund in Limerick.

The cabin, which is located just outside Penney’s, will provide an opportunity for children and families to experience the magic of Christmas and have a photo taken with Santa at no cost.

The cabin features a Christmas tree, icicle lights, Santa's elves, twinkly windows, even a fireplace. Matthew Stephens' managing director Matthew Ryan said the staff in the city store "came up with the idea of having a Santa's Cabin and that it all be for a great charity".

“We’d really welcome any donations that will go directly to the Barnardos Homemaker Children's fund that will give back to those kids most in need in Limerick,” said Matthew Stephens' managing director Matthew Ryan.

Families also have the option of having a family photo taken with Santa inside the cabin, beside the Christmas tree and fireplace “but for this we’ll be asking for donations starting from €10 in an effort to raise as much as possible,” said Mr Ryan.

“The people of Limerick have been very good to us over the past 40 years. We wanted to give something back to city and to the people who have supported us over the years. We also hope that it will bring much joy and happiness to young and old and might be the first step of bringing a Christmas market to the city centre's Urban Garden," he explained.

“It has cost a small fortune but we hope that it adds to the festive buzz in the city over the coming weeks and that it brings lots of “oohhs and aahhs to all who stop to look at it.

“We wanted to bring a little bit of magic to the Streets of Limerick."

The jeweller recently unveiled its own amazing festive lights display and Mr Ryan said: “We want parents to bring their kids to see the sparkling lights and magical effect and atmosphere that only Christmas can bring.

"Christmas is such an amazing time for young and old and helps create such special memories. But its not only the outside- the inside has had a major decoration. We want to make that Christmas feeling as special as possible and make it an experience our customers will never forget."

Early reports and general opinion from other Limerick retailers is that its all shaping up to be a fantastic few weeks of trading for all city businesses.

“There are so many fantastic things happening in the city and the future is very bright – the best is definitely yet to come, but the city businesses need the support of each and every person from Limerick and surrounding area, in order to make Limerick the thriving City that we all want it to be," added Mr Ryan.