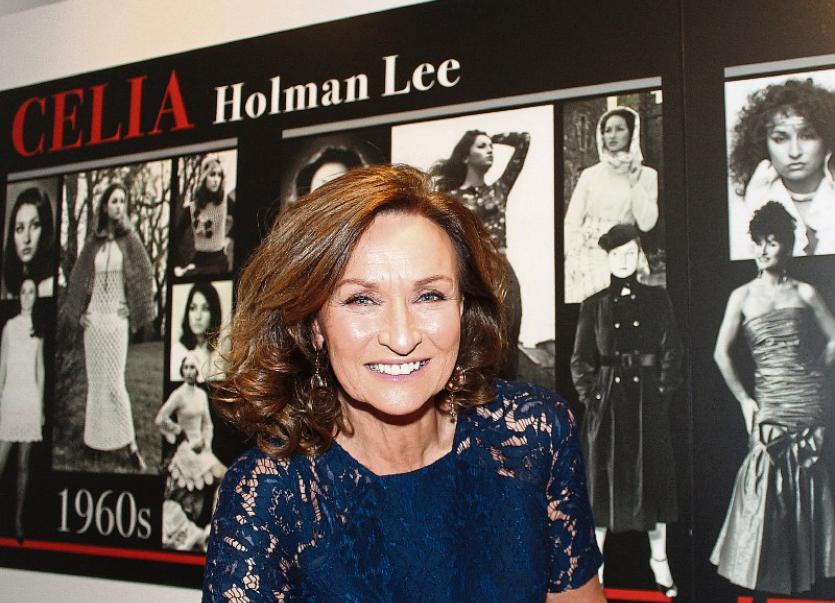 After 52 years in the modelling industry, Celia Holman Lee puts her great energy down to her good diet and taking care of herself

IN an era in which trainers, sweats and leggings are de rigueur uniform of many Irish females, Celia Holman Lee refuses to pop into Limerick city in a pair of sneakers.

You won’t find her perusing the counter of Brown Thomas in a puffa jacket and jeans. Nor will she be picking up her groceries in the aisles of Tesco sans makeup.

At 67, the Limerick fashionista has standards to maintain. Having built a career on style, beauty and looking her best, her philosophy when it comes to facing the world each day is “you pull yourself together”.

“I don’t get that look, at all. I could never get it. I could never go around the town like that.  I see friends in town in their sneakers, leggings and lovely big puffa jackets and they look amazing, divine – but not for me, not in a thousand years,” says the model agent who celebrated her 67th birthday on December 2 last.

So would she ever not wear a pair of heels going into town?

“It’s not about heels,” she insists. “It’s an old way of dressing for me,” she points out, “you pull yourself together. I never even think about it. You have to look at my age - it’s a different way of dressing. All that look wasn’t out when I was younger.”

Growing up in the 1950s when women rarely wore trousers and the hourglass shape was celebrated in all its glory, Celia had plenty of role models to aspire to be like, and many of them remain her style inspirations to this day.

“You had the likes of Jean Shrimpton, Brigitte Bardot and Sophia Loren. Jean Shrimpton was in every magazine - she was one of the biggest stars. She was Terence Stamp’s girlfriend for years and they were like the golden couple.

"I was also obsessed with Twiggy for a while when I was younger. Who I admire now in the fashion industry is Diane von Furstenberg. She is around my vintage and she still looks very clean and cool and nice.”

Having started out as a model at the age of 15 while still at school after being approached while working as a shop assistant, Celia founded her model agency at the age of 22 and has been running it for the past 45 years.

“I have never felt my age, ever,” she reveals. “The only time I ever feel my age is when I am travelling a lot but that goes for everyone. I get tired.

"Sometimes I go from Limerick to Dublin, do what I have to do on Ireland AM, go from Dublin to Cork for RTE and from Cork back to Limerick in two days. I think I’m blessed I have this energy and I’m so grateful - so grateful for it.”

In recent times she has made a conscious decision to take things a little bit easier.

“It’s more so to be around for the grandchildren,” she points out.

While she enjoys very good health, she has developed asthma in recent years, a consequence of running fashion shows “in nearly every community hall, school and in every tent and dome in all weathers.

“It’s from working backstage for nearly 50 years at shows. I always, always had a bit of  chest infection.”

She caught pneumonia last year. “Sorry now, pet,” she goes on, “I got a fella to look at my Christmas lights and they’re not working.”

“Yeah, not working. Ah well, not to worry,” she continues before returning to the issue of her health.

“Yes, my love, I had pneumonia last year. It’s from all those years working behind the scenes, having a bit of cold and then getting caught in a draft, the cold getting worse and ignoring it. I’m not being precious here - there are so many people worse off - but I cannot afford to get a  cold.”

While she doesn’t go to the gym she gets “a rush of blood to the head and goes walking for two weeks”.

For her birthday, Celia didn’t want anything, just vouchers for Brown Thomas to treat herself to her favourite (and costly) La Mer serum.

“I love it. I think it’s fantastic. I use the brand new one they got in, the Serum Essence. I’ve always loved it. It suits my skin. My skin doesn’t need anything too strong or too chemical. It needs pampering. It reacts better when I pamper it and the ingredients are good. I put the serum on morning and night.”

Would she ever commit the skin sin of sleeping with her makeup on?

“Oh jeepers no,” she laughs, “no matter how many glasses of bubbly I’ve had, it comes off!”

She says she eats very well - “lots of fish”.

“I love salmon and I eat lots of greens. I try to incorporate all the good things like nuts and yoghurts and vitamin tablets. I love dark chocolate - 80 percent and I do like my glass of wine, red, but one thing I don’t eat and this could be one of my saviours is I don’t eat sauces, never.

“Like anyone, on days when I’m travelling, I’d be so hungry that I’d grab a pack of crisps as fast as I’d look at you.”

If the photos are anything to go by, taking care of herself, is certainly paying off for Celia.

She was the picture of health and poise when she was photographed in a black bikini splashing about on the beach while on holiday in Saint- Tropez.

“Those photos were taken on an iPhone - Ger’s iPhone,” she says.

She is however, fond of “this new movement” where, to use a quote of her own, “the new age is no age.