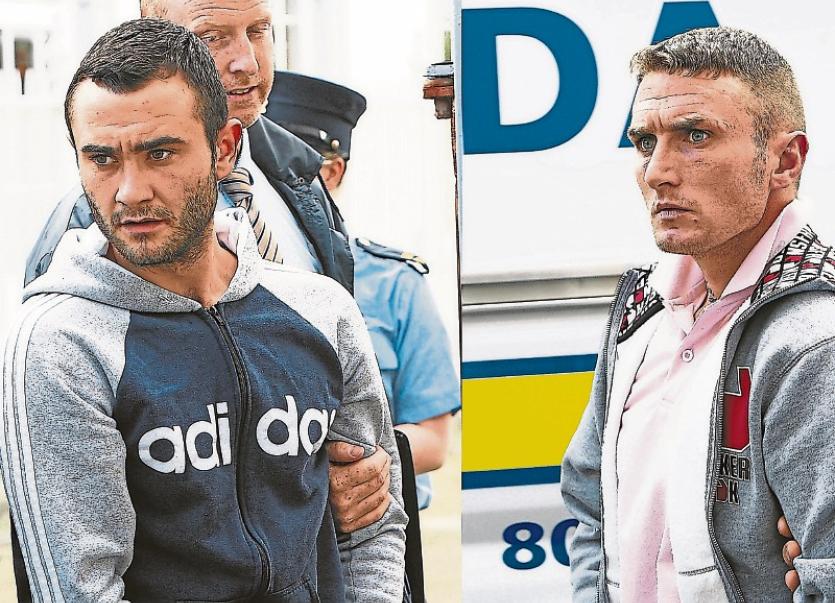 David Casey and Michael Casey who were sentenced at Limerick Circuit Criminal Court on December 15, 2016

PROSECUTORS are seeking increased prison sentences for two men jailed for a “fatal burglary” at the home of a 62-year-old in Limerick.

Cousins Michael Casey, 34, with an address at Clonlong Halting Site, Southill, in Limerick and David Casey, 22, with an address at Carragh Park, Belcamp, Dublin 17, had pleaded guilty to a series of burglaries, including one at the home of John O'Donoghue at Toomaline, Doon, on August 27, 2015.

The Director of Public Prosecutions is seeking a review of the men's sentences on grounds that they were “unduly lenient”.

Counsel for the DPP, Thomas O'Malley BL, submitted this Thursday morning that the sentence was too low for the burglary of the O’Donoghue household when one considered the harm that was caused in that particular case.

Mr O'Malley said there was a second victim to consider - Mr O’Donoghue's surviving sister – who had to watch her brother “drop dead in front of the family home” as he was about to confront the two intruders.

“Of course they didn't for a moment intend to harm anybody,” Mr O'Malley said, but “they had to take their victim as they found him”.

He said offenders who engage in residential burglary must take account of the fact they might disturb somebody and that “this kind of thing can happen. Somebody could become ill or die as a result of the fright”.

There was an “inherent risk” in burglary and there had to be a punishment that reflected that harm, he submitted.

He said David Casey was on bail at the time the burglaries were committed and the sentencing judge did not allude to that in his sentencing remarks.

Mr O'Malley said the sentencing judge failed to specify the headline sentence before making appropriate adjustments for any personal circumstances of the accused.

He said headline sentences function to send out a message, to censure the criminal conduct involved, and were important for general deterrence. This kind of repeated residential burglary was “conduct that is the cause of tremendous public concern at the present time”.

He said the offences were not committed impulsively or opportunistically but the Caseys had selected and targetted four different dwellings as part of a burglary “spree” on the same day.

Mr O'Malley said one of the houses was “ransacked” and inadequate attention was given to that aggravating feature by the sentencing judge.

He said the “thrashing” of a home added to the trauma and distress suffered by the homeowners. “There can be few greater traumas than going home and finding your home thrashed.”

Mr O'Malley said it was important to clarify that these were dwellings because of the constitutional protection that is afforded to the dwelling. He said the offences were a constitutional violation perpetrated by private parties and the state's role was to vindicate that right.

He said the Caseys satisfied themselves up to a point that the houses were unoccupied but they didn't deserve any credit for choosing to enter houses that were unoccupied at the time.

Consecutive sentences would not have been unreasonable and if not, then the sentence for the most serious offence - involving the death of Mr O'Donoghue - should have been higher, Mr O'Malley submitted.

Counsel for David Casey, Michael Bowman SC, said what happened after the incident couldn't aggravate the offence and there was no evidence the cousins deliberately walked past Mr O'Donoghue as he was having a “fit or a heart attack”.

Mr Bowman said David Casey was 20 at the time of the offence He had his own “personal difficulties” and appeared to have progressed significantly while in custody.

Counsel for Michael Casey, Vincent Heneghan SC, said the final year of the sentences were suspended on condition both cousins be of good behaviour for six years from the date of sentence. That indicated that the Circuit Court judge had measured the gravity of the offences that were before him, he submitted.

Mr Heneghan said the Circuit Court judge did not hand sentence down “there and then” but adjourned the case to consider all aspects.

He said the judge did not miss a thing save for the headline sentence and he “clearly started much higher” than where he ended up having regard to mitigation for the guilty plea, remorse and admissions.

Mr Justice George Birmingham, who sat with Mr Justice Alan Mahon and Mr Justice John Edwards, said the court hoped to have a decision, if not a judgment in the case, on Monday.

Before the appeal hearing commenced, Mr Justice Birmingham said he would be asking the registrar of the court to write to the Irish Prison Service expressing the court's disappointment with prisoners being made available to court on time.

Mr Justice Birmingham said the court appreciated the prison service had their own difficulties but when an appeal listed for 10.30am commences at 12.10pm it “requires explanation”.

“This really is a major difficulty,” the judge said.

On an earlier occasion, prosecuting counsel, John G O'Sullivan BL, referred to the case as a “fatal burglary”.