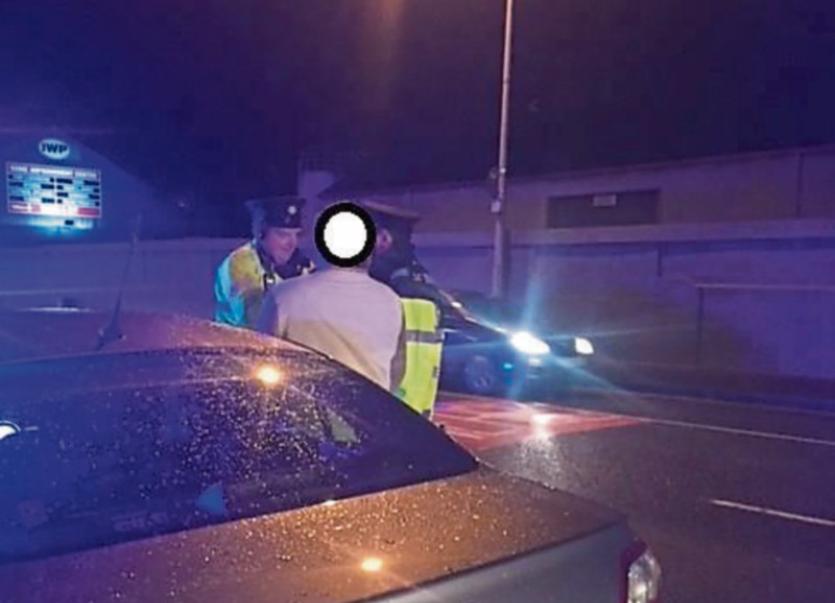 A man was arrested on suspicion of drink driving last Thursday night after he failed a roadside breath test having been stopped at a checkpoint on the Dock Road Picture: Garda Traffic

THE head of the Limerick garda division says he’s concerned that young people are continuing to drink and drive despite numerous appeals and road safety warnings.

Briefing members of the Limerick Joint Policing Committee, Chief Superintendent David Sheahan revealed there have been more than 600 detections for either drink driving or drug driving across the Limerick division since the beginning of 2016.

Of those apprehended by gardai, almost two thirds (63%) were aged between 20 and 39.

The vast majority of detections occurred in the greater city area while more than 80% of the suspected offenders were male. Nearly a third of all incidents involved young men aged between 20 and 29.

The prevalence of drink-driving was highlighted as recently as last Thursday night when a man was arrested at a checkpoint on the Dock Road after he failed a roadside breath test.

The driver and his female passenger were travelling on the outbound lane when the car was stopped shortly before 9pm.

Chief Supt Sheahan says the statistics show that young people don’t seem to be getting the message when it comes to drink driving.

“There was a perception that millennial's were not engaged in this kind of behaviour and that they have learned but they have not,” he said.

He said it beggars belief that people are continuing to drive while under the influence of alcohol or drugs and that something has to be done to get the message through.

A major campaign focusing on drink-driving over the Christmas and New Year period is now underway.

There will be high visibility checkpoints and additional patrols across the city and county.