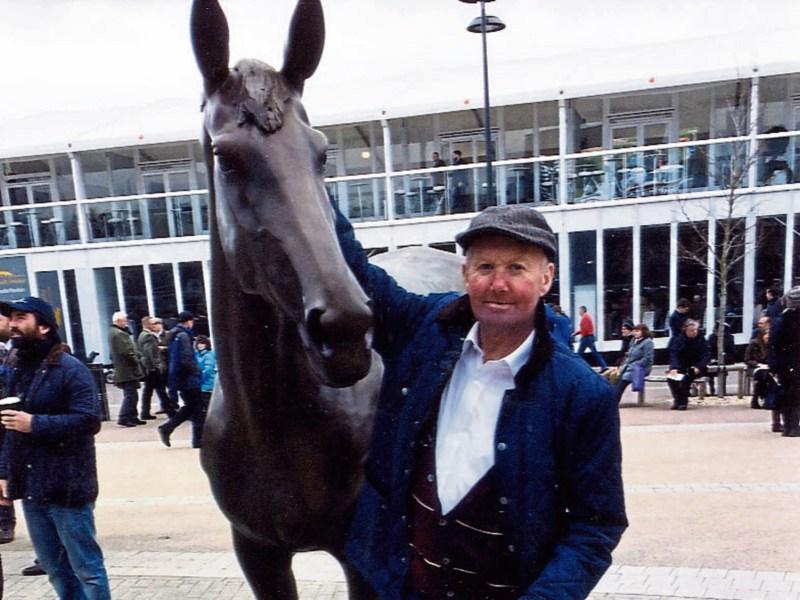 Hundreds from the senior, bord na nog, ladies football and camogie set-ups stood respectfully from the village hall to the church as the hearse passed.

On the day he died, Johnny, aged 69, was returning home after purchasing blocks at McGrath’s Quarries in Herbertstown.

The builder and carpenter was completing renovations on the GAA clubhouse. Johnny fell ill while driving between Caherconlish and Herbertstown, and never regained consciousness.

After his car crashed on November 23, his daughter Mairead said a lady in a vehicle behind him immediately started CPR.

She described it as a “horrific shock” when a kind-hearted neighbour called to the house to tell her the terrible news. Mairead lived with her father in Abington.

The family is very thankful that nobody else was hurt during the accident.

“Daddy was a very kind person. He would hate it if someone else was hurt. He would be absolutely devastated. He was a very kind soul - he always had time for everybody. Thankfully there was nobody else hurt,” said Mairead, who presumes it was a “heart attack”.

“A very nice garda said he thought he was gone instantly.”

In fact, going to UHL was the first time Mairead can remember going to a hospital for anything to do with her father.

“He was allergic to doctors. He would go to a chemist but not a doctor. He was never sick or sore in his life - he was never in hospital. A couple of months ago he got stung alive with bees. I said he would have to go to the hospital but he said, ‘I’m grand, there’s no fear of me’. He was tough out,” said Mairead.

She put her father’s aversion to hospitals and doctors down to the fact that his beloved wife Breda was sick for three and a half years before she died 12 years ago.

Mairead was only 15 and her brother Timmy, 17, when their mum died from cancer.

“It was very hard. He was lost altogether when my mum passed away. He and my mother were childhood sweethearts. The night my mother passed away, daddy said it had been the first time he had slept in years because he knew she wasn’t suffering anymore.

“He used to speak about her often and any mention of her name he’d nearly well up. Daddy had a real soft heart.

“He was always there for myself and Timmy. He did everything he could for us. He was a great father.”

Despite being on the cusp of turning 70, Johnny was as busy as ever.

Mairead said she and her brother, who works in England, said they have been “totally overwhelmed by the kindness of people”.

There was a knack to opening their front door that the family knew but not all the extra callers so one man quietly fixed it.

Another replaced the front light bulb that went. While Mairead says if she was in the house for a month she couldn’t eat all the food that was brought over. Actions speak louder than words.

“People were so kind I haven’t the words to thank people. Daddy would be totally taken aback by that.”

Apart from his family and work, the other love of Johnny’s Life was Murroe-Boher GAA club and Limerick hurling.

“He went to all the club and Limerick matches. He’d be a fierce hurling man. It’s probably the only time he would get a bit flustered or agitated, when he would be at a match. He was the number one Murroe-Boher GAA lotto seller. Anyone that would come in to the house he’d say, ‘Ah you will buy an auld lotto ticket’. Sundays would be like a parish social in our house because everybody would call to do the lotto. He would always be involved in the club. He wouldn’t like to be front and centre but he would always be there,” said Mairead.

Paul Byrnes, Murroe-Boher GAA club chairman, knew Johnny from the age of four and they grew to be friends in later life.

“He was involved in the club with underage structures as a selector and mentor. His son Timmy played with county development squads. He was very involved in the committee and pushing the lotto. He was the top seller. In recent times we were renovating the clubhouse. He was the main contractor and had 80 to 90 per cent of the work done. My last conversation with him was when he was erecting a ceiling. Little did I know he wouldn’t be around to see it finished. He has done a fantastic job on the clubhouse,” said Paul.

The club chairman described Johnny as a quiet man who made a big impact.

“If more clubs had fellas like him - little talk but all action - we’d be in a better place. Those guys are hard to find. It was a huge shock to the community. He is a huge loss,” said Paul.

It was probably the biggest ever guard of honour at a funeral Mass given by Murroe-Boher GAA club.

“They came out in their hundreds. They stood from the hall up to the church - it was absolutely unreal. It was the greatest accolade we could give.”

A respectful and dignified send-off befitting a man like Johnny O’Brien. May he rest in peace.