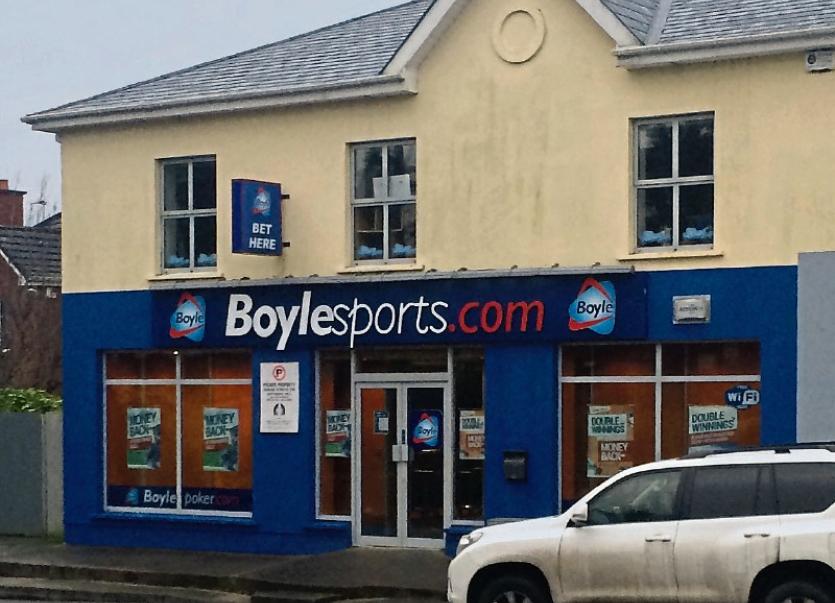 More than €6,000 was taken from Boylesports in Ballycumming during the incident

GARDAI investigating an “aggressive” armed robbery at a bookmaker in Limerick city this week have prepared a file for Director of Public Prosecutions, following the arrest of two people.

Three hatchet-wielding raiders entered Boylesports in Ballycummin and demanded cash from two employees in an incident at around 9.15pm on Tuesday.

The three individuals were wearing balaclavas and threatened staff members. According to sources, the culprits were “aggressive and destructive”.

It is understood that one employee “was pinned to the wall” during the incident.

The three left the scene with more than €6,000 in cash in a dark silver car.

On Wednesday afternoon, gardai confirmed that a man in his 30s and a woman in her 20s “were released from Shannon garda station and pending a file to the Director of Public Prosecutions”.

Cllr James Collins, who manages Collins Bar in Dooradoyle, said that he was “shocked that this happened in our neighbourhood. I am sure it was very frightening for the staff that were involved. It seems to have been very aggressive. It is not something that has happened in the neighbourhood in recent times.”

He said that residents in the area are requesting CCTV cameras to be installed in the area to help prevent crime.

Reacting to the incident, former detective garda and metropolitan mayor, Cllr Sean Lynch said that the culprits “sound like novices”.

“The one thing about that crime is that they didn’t always wear the balaclavas. Some members of the public may have witnessed this vehicle, and these three guys acting suspiciously. They appear to have been nervous, so probably left plenty of evidence behind them.”

Cllr Daniel Butler said it is “of huge concern to see that level of crime happening in the Raheen-Dooradoyle area, where it wouldn’t be so common. I would be calling on additional patrols on behalf of the gardai to come out to the area. I know, at the moment, they are stretched”.

“My thoughts are with the staff because, obviously, it is very shocking and stressful time for them. I can only imagine what they have gone through. All the staff are living locally in the area, and it is a hugely popular local betting shop.”

Sinn Fein TD Maurice Quinlivan has urged Minister for Justice Charles Flanagan to take on an extra 100 gardai, as recommended in the Fitzgerald Report in 2007.

“This robbery, in addition to other criminal behaviour and anti-social behaviour across Limerick city, shows the need for additional Gardai and resources to be made available to combat crime in our city.

“The Fitzgerald Report published in 2007, recommended that intensive policing arrangements should be put in place which ‘will involve a minimum of 100 additional Gardaí, with appropriate management structures, whose sole function will be the policing of these areas’.”