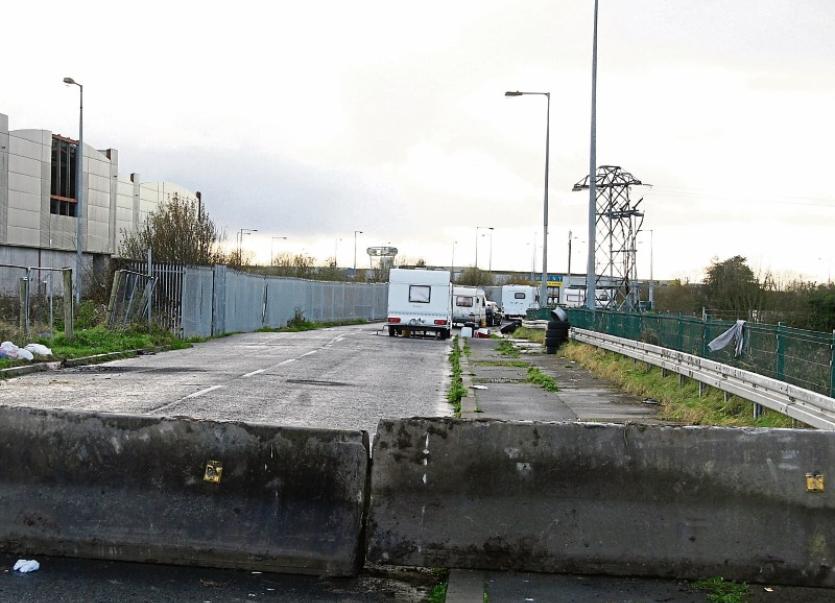 Some of the caravans which were parked near the site of the Northern Distributor Road last week Picture: Adrian Butler

LAWYERS representing Limerick City and County Council are expected to return to court later this week after a number of Travellers failed to comply with an Order requiring them to leave an unofficial halting site on the outskirts of the city.

The local authority secured an injunction against a number of named individuals last week requiring them to move away from a public road off Clondrinagh Roundabout.

While the deadline to comply with the order was 12 noon on Sunday, a number of caravans remained in the area on Monday evening.

Making the application under the provisions of the Planning and Development Act 2000 Pat Quinn BL, representing Limerick City and County Council said construction of the Northern Distributor Road has been delayed due to the presence of Travellers on the road.

Instructed by solicitor Ger Reidy, he said the multi-million euro project could not be progressed due to the presence of several caravans and other vehicles on the road which has been closed to traffic for some time.

Mr Quinn told Judge James O’Donoghue the delay has the potential to cost the local authority €10,000 a day as the main contractor, who has submitted a claim for €500,000, has not been able to carry out any work at the site.

Limerick Circuit Court heard the road where the caravans are located is to be used to transport more than 400,000 cubic metres of material to and from the construction site.

A number of Affidavits from Council officials were submitted to the court in support of the injunction application.

Having considered the matter, Judge O’Donoghue said he was satisfied the named individuals were causing an obstruction and that their presence on the road constitutes an unauthorised development.

Granting the council’s application, the judge told the respondents they had to be “off the road and gone from the whole area” by midday on Sunday.

Similar orders were granted in relation to nine other named individuals and their families last month.

The proceedings relate to thirteen named individuals and their families. All are members of three different extended families.

Judge O’Donoghue granted the council leave to re-enter the matter in the event of the order not being complied with.