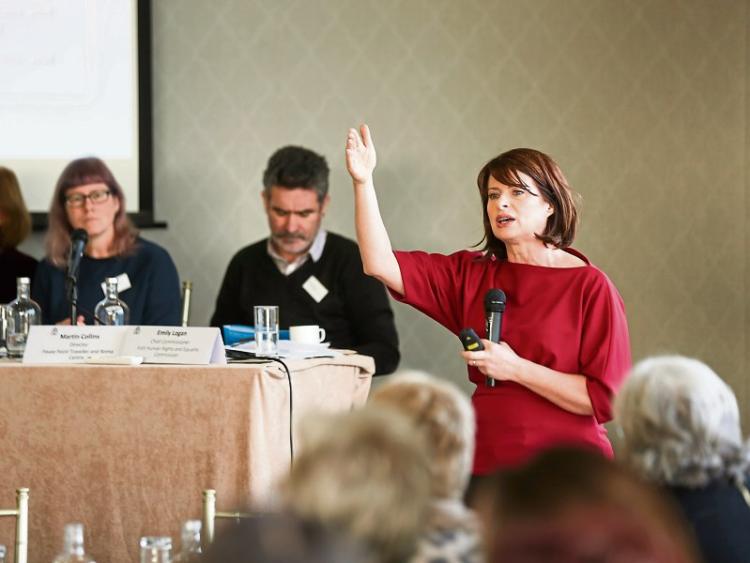 THE PUBLIC sector has a responsibility to ensure that discrimination or harassment doesn’t take place on its watch — regardless of whether or not an incident has been reported.

That’s according to Emily Logan, Chief Commissioner at the Irish Human Rights and Equality Commission, who led an event at Limerick’s Strand Hotel to guide public bodies — including Limerick City and County Council, higher education institutions and public sector workplaces — in their duties.

The Limerick-born commissioner said that requiring the victim of discrimination or inequality to come forward with a complaint is “burdensome” and does nothing to help an increase in reportage, as it places pressure on the victims.

“It’s a complaints model, where it relies very heavily on an individual to make a complaint.

“So if it’s any of the gender-related experiences of discrimination that have been spoken about recently in the media — it relies on the individual to challenge the discrimination, and if a person isn’t able or isn’t willing to do that, then the discrimination continues unchallenged,” she said, advising public bodies in Limerick in how they can better fulfil their human rights duties.

“Instead of waiting until an organisation is either sued or complained against, this is now a legal duty for all public bodies.

“This is where the burden shifts to the public body to ensure that this is not happening and that three steps are followed.”

The first, according to the commissioner, is to eliminate discrimination across all of the nine grounds of equality legislation — including gender, membership of a minority group, or ability.

The second step for public bodies is to actively promote equality of opportunity and treatment, within a staff and employer context, and also towards the people for whom the service is provided.

The third duty is about protecting human rights, explained the commissioner — “very central to this are the principles of dignity and respect for people”.

While the laws are there in black ink, Chief Commissioner Logan said that events like this are organised to promote a cultural shift that will help in their enforcement.

“This is very much about culture, and about changing culture. At the moment, while we have good strong equality legislation — the laws on discrimination are good in Ireland — sometimes it’s hard to evidence,” she said.

For example, if a local authority is preparing a strategy, the duties and standards which need to be adhered to must be “embedded” in that strategy.

If an issue is raised, the public body must report on it and communicate it with the public.

Although not public bodies in themselves, any companies contracted to work for a public body, like builders contracted for the council, must also prove they comply with anti-discrimination rules.

“There are still some key areas of discrimination currently in Ireland. We see women facing it mostly in a work and employment context. You also see things like people who are white from outside the EEA, often reporting no discrimination at all, whether it’s in the public or private sector. When you change that to black respondents, they experience discrimination right across the board. People with disabilities is another key group,” said Ms Logan.

The Irish Human Rights and Equality Commission can offer assistance to people who feel they are facing discrimination, and are contactable on www.IHREC.ie.