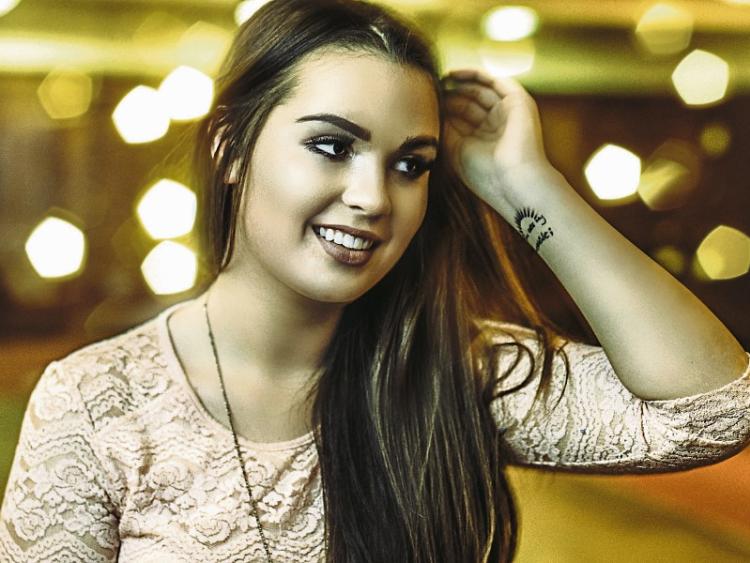 Clodagh Cahill sporting a tattoo in her mothers handwriting

A YOUNG Limerick-based businesswoman who attempted to take her own life in 2014 has encouraged people to “ask for help before it’s too late,” after losing two loved ones to suicide this year.

Miss Bikini Ireland finalist Clodagh Cahill, 24, has described her background as “not the average,” and wants to show people that even if you have a tough start to life, you can still come out strong.

“My mother suffered with addiction, anxiety and depression for all of my life, so it was very much alive in my life,” she explained.

At age 11, Ms Cahill was placed in foster care with a family relative in Offaly.

“The last place l lived, I was telling myself to pretend that I was happy if I wanted to live there, which is wrong. It’s all good being positive but you need to embrace your feelings, growing up telling yourself to stop crying and pretending you’re happy is completely wrong.”

The Caherdavin resident said for a long time she felt that she was a “miserable moan” which resulted in her attempting to take her own life in 2014.

“I genuinely believed that the world would be better off without me, because I was nothing but a miserable moan and brought nothing, which is completely wrong,” she said.

She believes that if someone had spoken to her in a way that said it was ok and that she had been through a lot to feel this way, she wouldn't have felt such of a “burden.”

After leaving foster care, the Dublin native moved to Limerick to attend an animation and motion design course at Limerick Institute of Technology.

“My mother inspired me to do art and Limerick was the first place I felt as my own home, as my partner is from Limerick,” she added.

Upon moving to Limerick, Ms Cahill got involved in a healthy exercise and food regime, which she said really helped her self-esteem and confidence.

When she got her degree and graduated, Ms Cahill said she felt like there was a “big hole inside her” and that the 10 years of sadness and emotion could not be filled by a piece of paper.

“I went to my GP and said that my life was unbearable, I was just existing and I needed help as I have tried counseling, fitness and eating healthy.

“Some mornings I didn't want to get out of bed or I was getting up with a lump in my throat and the urge to cry, so I was prescribed medication,” she said.

Having been on medication since April, Ms Cahill says that she doesn't have that feeling anymore.

“It’s not for everyone, I’m not saying it is for everyone. I am of the belief that if you have a headache you take medication, your mental health should be the same,” she explained.

In August this year, Ms Cahill discovered her friend had died by suicide; unbeknownst to her, her own mother also died the same way on that night.

“I entered Miss Bikini Ireland to show that you don’t have to come from a strong background or the perfect family. I want to use the platform to raise awareness of mental health and potentially become a mental health advocate,” she said.

She believes that mental health should be taught to children through schools at a young age so they can understand their emotions.

“When I was eight I used to write in my diary that I was crying myself to sleep, I have a niece that is that age now and if I thought for a second that she was thinking or feeling the way I did, I would be devastated.”

Ms Cahill believes that young girls comparing themselves to their idols is not good and can only put unnecessary pressure on them.

“When I went to Body Power Expo back in May, people who I thought looked perfect online, didn’t look that perfect and I took relief from that, which is wrong. I shouldn’t be taking comfort from people who don’t look perfect because it’s shallow,” she said.

She believes that people should be focusing on bettering  themselves more than focusing on other people.

“I'm just a normal girl who is trying to build a life for myself and make an example to show others all you need is hard work and belief in yourself to succeed,” she concluded.