12 new houses to be built in Limerick's St Mary's Park 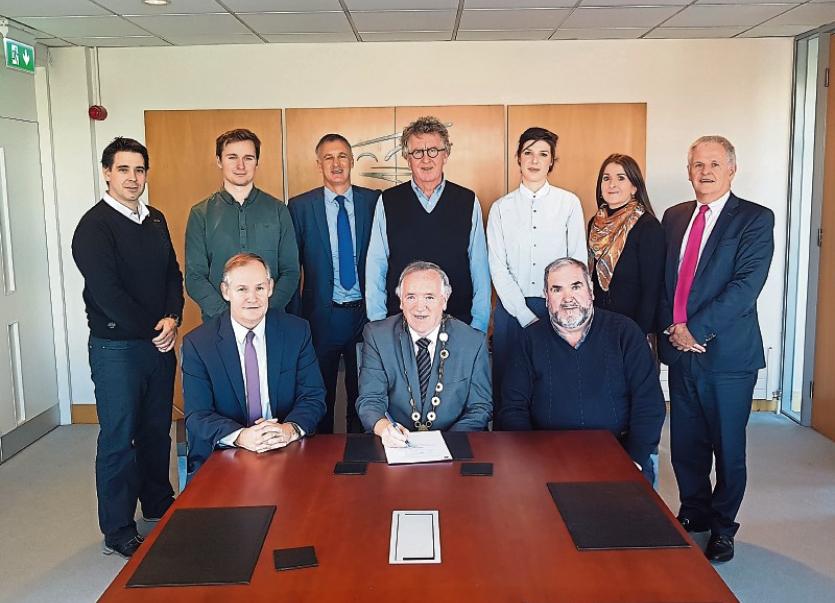 At the signing of the contracts for the houses in St Mary’s Park at City Hall were representatives of Limerick City and County Council, Paul Keogh Architects and Martin’s Construction Ltd

Contracts for the project, which will see houses built at a number of locations within St Mary’s Park have been signed between Limerick City and County Council and Martin’s Construction.

The scheme of replacement units has been designed by the award-winning Paul Keogh Architects and will serve to knit the existing gapped streetscapes back together.

“These new homes will be built on vacant sites cleared following the demolition of a number of properties.  The homes will be able to accommodate families of varying sizes,” said a spokesperson for Limerick City and County Council who confirmed it is expected the houses will be completed by the end of next year.

“This new-build project is a major boost to the area.  It is the first in recent times for St Mary's Park and is part of the commitment made under the Limerick Regeneration Framework Implementation Plan,” said Mayor of Limerick City and County, Cllr Stephen Keary.

Sean McGlynn, regeneration programme manager with the local authority says the signing of the contracts is significant.

“The signing of the contract for the building of these 12 homes marks a positive step toward the physical rejuvenation of the built environment of St Mary’s Park,” he said.

“This phase of the massive programme will continue with a further seven units being built on other infill sites in the estate.  When completed a total of 19 units will be available to families,” he added.

Louise Loughnane of Martin’s Construction says the company is delighted to have been awarded the contract.

“It is a great opportunity for a regionally-based company to work with Limerick City and County Council and in St Mary’s Park, where we will be building homes for families,” she said.

The project is funded by the Department of Housing, Planning and Local Government throught its Rebuilding Ireland programme.